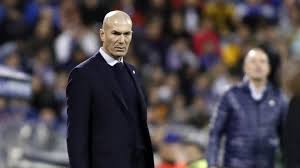 Real Madrid manager, Zinedine Zidane, has taken the blame for his sides slow start in their 1-0 win over Atletico Madrid on Saturday.

Karim Benzema netted early in the second, to extend Los Blancos’ lead over second-placed Barcelona to six points in LaLiga.

However, Zidane’s men were sluggish in the opening 45 minutes and could have behind with Vitolo going close and Angel Correa hitting the woodwork.

Zidane brought on Vinicius Jr, who played a key part in Benzema’s winner and Lucas Vazquez at half time, with Federico Valverde moving inside.

“I was not happy with what I saw on the pitch in the first half. But it was not the players’ fault, it was my responsibility.

“So I changed Isco and Toni [Kroos], but it could have been another two. A change was needed.

“Five in midfield has worked before. But not today, we found it hard to get into the game, were not good with the ball. But in the end when things are not working, you must change it, I am here for that too.

“We began the second half in a different way, opening up the pitch, pressuring up high. We were better in everything, we deserved to win and take the three points. We cannot always play really well from the first minute,” Zidane told a news conference.