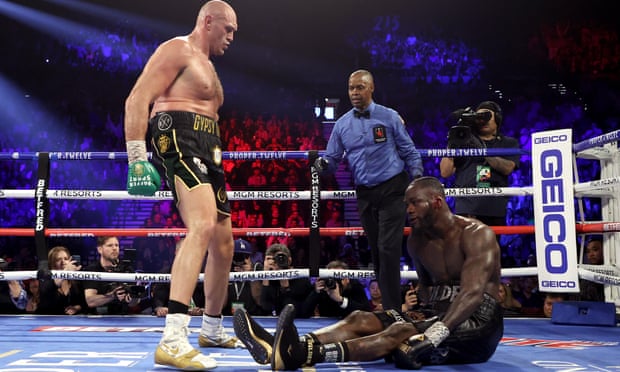 Tyson Fury led from the start, rocking Wilder from the first round.

Both men were having a rematch of their unfinished business after the first fight on December 1st 2019; ended in a stalemate.

Indeed, the build-up to this rematch had witnessed some heavy talking from both camps.

However, it did not take long before the self-styled Gypsy King to live up to his words. A barrage of punches in the third round led to blood streaming from Wilder’s mouth. Also, the erstwhile WBC champion had blood pouring from his ears. Initial suspicion is that one of Fury’s lethal punches had connected and burst his left ear-drum.

From then on, Wilder found it hard living with the Gypsy King, Fury. His legs appeared wobbly and only the bell saved from a third round knock-out. Also, he was knocked out down in the fifth round. However, Deontay Wilder is not called the Bronze Bomber for nothing. He soldiered on, round after round, until the seventh round.

‘‘First and foremost, I want to say a big thank you to my Lord and Saviour, Jesus Christ. I always said it that those who stand in the dark cannot come into the light.’’

Also, he paid tributes to Wilder.

‘‘Big shout out to Deontay Wilder. I hit him with a clean right hand in the third. But he took it and manned up, battling till the seventh round. He will recover. He will be back. And he will be a champion again in the future.’’

Also, Wilder admitted to some issues after the third round.

‘‘The best man won tonight. Congratulations to Fury. Things like this happen but I will be back. I had some issues coming into the fight and also had issues with my leg in the third round.”

Wilder has a 30-day window in which to activate a rematch clause which he is expected to take up. However, the immediate inquest will focus on how arguably the world’s most powerful boxer lost his mojo in the third round.