The Minister of Information and Culture, Lai Mohammed on Thursday accused the Presidential candidate of the Peoples Democratic Party (PDP), Atiku Abubakar of copying the economic blueprint of the President Muhammadu Buhari-led administration.

According to the Minister, the Economic Blueprint released by Atiku in Lagos last week was copied from Buhari’s achievements.

Lai claimed that the former vice president copied his principal in the area of job creation, infrastructure financing, relationship with the private sector, rejuvenation of the power sector, poverty reduction, debt management and the overall management of the economy.

The minister stated this during a press conference at the National Press Centre in Abuja, on Thursday.

He claimed that PDP presidential candidate, Atiku is presenting a poor version of Buhari’s Economic Blueprint, adding that it is shocking that the same opposition party has condemned the blueprint they are copying.

Governor Aminu Tambuwal of Sokoto State has emerged as the acting Chairman of the Nigeria Governors’ Forum (NGF).

In a statement on Thursday by the NGF spokesman, Abdulrazaque Bello-Barkindo, Governor Tambuwal replaced his Ekiti State counterpart, Kayode Fayemi, as the new head of the Forum.

The statement said Tambuwal, who was the NGF Vice Chairman until his new role, took over from Fayemi at the National Economic Council meeting in Aso Rock Villa, Abuja.

According to the statement, the Sokoto governor will be presiding over the Forum until May 2023 when an election will be held. It added that Fayemi will formally hand over the Chairmanship role to Tambuwal on October 16.

The details of the meeting between Governor Nyesom Wike of River State and leaders and stakeholders of the Peoples Democratic Party (PDP) in the state have emerged.

Naija News earlier reported that Governor Wike had summoned the PDP leaders and stakeholders to a meeting at the Banquet Hall of the Government House in Port Harcourt, the state capital.

Speaking with reporters after the meeting, Wike said that he and his camp will not be leaving the party contrary to speculations on social media, adding that he will continue to fight for internal democracy.

The governor promised that his camp will ensure that the opposition PDP follows due process, stating that he will not back out of the fight to ensure inclusivity in the party.

Wike, however, wondered why the presidential candidate, Atiku Abubakar, is promising to unify Nigeria, but cannot unite the party and resolve the internal wranglings.

Naija News gathered that Deputy Inspectors General of Police(DIGs), Assistant Generals of Police(AIGs), Commissioners of Police (CPs) from the 36, States and the Federal Capital Territory(FCT) among other senior police officers are attending the meeting.

The meeting is expected to deliberate on the 2023 general elections, assault on policemen on duty, upcoming police retreat, conference, and police games, among other critical issues.

Nigeria’s Minister of Information and Culture, Lai Mohammed has described as unfortunate claims in the Economic Blueprint released by the presidential candidate of the Peoples Democratic Party (PDP), Atiku Abubakar, in Lagos last week.

Naija News recalls that Atiku at an event in Lagos State a week ago expressed his intention for Nigeria ahead of the 2023 election.

The former Vice President in his drafted blueprint highlighted projects and areas his administration will focus on if elected as the next president of Nigeria in the coming election.

In the economic blueprint, the PDP flag-bearer explained how his government would address job creation, infrastructure financing, relationship with the private sector, rejuvenation of the power sector, poverty reduction, debt management and the overall management of the economy differently from the previous administration.

However, Mohammed who spoke during a press conference at the National Press Centre in Abuja, on Thursday, said Atiku only succeeded in copying the achievement of his principal, President Muhammadu Buhari.

The governor, who is one of the pioneers in the establishment of the Western Nigeria Security Network (Amotekun Corps) in Southwest states, accused the federal government of operating on double standards.

In a statement released on Thursday via his social media page, Akeredolu noted that denying Amotekun the right to legitimately bear arms is a repudiation of the basis of true federalism which they are clamouring for.

The governor stressed that holding back Amotekun from bearing arms is a deliberate destruction of the region’s agricultural sector and a threat to the lives of the citizens considering the growing activities of criminal elements.

The Governor of Akwa Ibom State, Udom Emmanuel, on Thursday, called on the leaders of the Peoples Democratic Party (PDP) to keep to their promises.

Udom stated this amid the calls for the National Chairman of the party, Iyorchia Ayu to resign from office.

Wike’s camp on Wednesday insisted that it would not be involved in the presidential campaign if Ayu does not resign.

Atiku in his reaction to their stand said Ayu will only be removed from his position if the law in the party allows it.

Naija News understands that reports had emerged claiming that Ayu had promised to quit his position if the PDP elects a northerner as its presidential candidate. But Ayu has refused to honour his promised despite the emergence of Atiku as presidential flagbearer.

Udom who is the Chairman of the PDP presidential campaign council said the aggrieved members of the party have the right to express their grievances.

The leadership of the Progressives Congress (PDP) has been locked in an emergency marathon meeting over the decision of Governor Nyesom Wike’s camp to withdraw from the Atiku Abubakar Presidential Campaign Council.

Recall that the Wike camp also vowed not to partake in Atiku’s campaign activities pending the resignation of the party’s National Chairman, Senator Iyorchia Ayu.

Naija News learned that the Wike camp made the decisions at a strategic meeting held in Port Harcourt in the early hours of Wednesday.

It was gathered that the Wike Camp decided to hold the meeting following the vote of confidence passed on Ayu as the party’s national chairman by the National Executive Committee (NEC) despite their demand for his resignation.

In a resolution read by a former PDP Deputy National Chairman, Bode George, the Wike camp insisted that its members will not work with Atiku until Ayu resigns and allow an acting Chairman from the South to lead the party.

The main opposition party leadership went into a marathon meeting to deliberate on the impact of the withdrawal on the party’s plans.

Confirming the meeting to The PUNCH, the PDP spokesman, Debo Ologunagba said the party had been meeting since Wike’s camp announced their withdrawal from the campaign council, adding that the National Working Committee would announce their decision today (Thursday).

The President of Nigeria, Muhammadu Buhari has approved the conferment of national honours on the former Chief of Army Staff, Tukur Buratai.

It is understood that Buratai who is Nigeria’s Ambassador to the Benin Republic will be decorated with the rank of Commander of the Order of the Federal Republic (CFR).Buratai is decorated at an investiture ceremony scheduled for October 11, 2022, at the International Conference Centre (ICC), Abuja.

The decision to decorate Buratai with the national honour is coming months after the president appointed him and other retiring service chiefs as non-career ambassadors.

The letter was signed by George Akume, the Minister of Special Duties and Inter-Governmental Affairs.

In another letter dated September 19 and marked FMSDIGA/NHA/001/T/91, it was stated that President Buhari had approved the conferment of the Officer of the Order of the Federal Republic (OFR) title on the Director-General of the Nigeria Maritime Administration and Safety Agency (NIMASA), Bashir Yusuf Jamoh.

The National Chairman of the Peoples Democratic Party (PDP), Dr. Iyorchia Ayu, has dismissed calls for his resignation or removal, insisting that the party does not want him to leave.

Recall that the Governor Nyesom Wike’s camp to had withdrawn from the Atiku Abubakar Presidential Campaign Council.

The Wike camp also vowed not to partake in Atiku’s campaign activities pending the resignation of the party’s National Chairman.

But reacting to the development in the party, Ayu, who spoke through his Special Assistant (Media), Simon Imobo-Tswam, urged Wike and his allies to return to the campaign council in the interest of peace.

Those are the top Nigerian newspaper headlines for today. Read more Nigerian news on Naija News. See you again tomorrow. 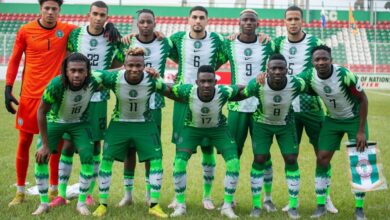