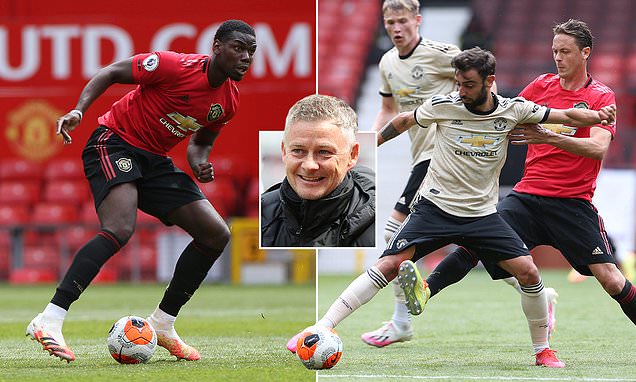 Manchester United returned to the Old Trafford pitch as they played in an intra-squad friendly ahead of the Premier League’s return.

Paul Pogba was present as the United stars returned to their stadium for the first time in three months wearing opposing home and away kits for their match.

The match was the first to take place at Old Trafford since their Manchester derby victory over City, as Ole Gunnar Solskjaer’s side became familiar again with their surroundings.

The match marked the first time Pogba and Fernandes have been on the pitch at the same time this season – albeit against each other.

Pogba and Fernandes are yet to play together because the Portuguese star’s arrival at the club coincided with the World Cup winner’s ankle injury.

Pogba has only made eight appearances all season due to his persistent injury that required surgery, with the France midfielder last playing for United on Boxing Day.

Despite missing out on the chance to play alongside Pogba, Fernandes has had a major impact on United since his arrival from Sporting Lisbon in January.

Another noticeable return was Marcus Rashford, who had been sidelined since January due to a back fracture.

Before his enforced break, the England striker was enjoying his best season to date, with 14 goals and five assists from 22 Premier League matches.

Aaron Wan Bissaka, Scott McTominay and Jesse Lingard were also among those pictured fighting hard as they aim to regain full match fitness.

United will return to action with an away game against Jose Mourinho’s Tottenham on June 19 in a crunch clash in the race for the top four.

Ole Gunnar Solskjaer will be hoping his team can continue their 10-game unbeaten streak from before the football hiatus, in which they won seven of those, scoring 28 times and conceding just twice along the way.

Man Utd to release James for loan – with new contract