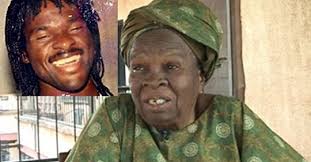 Nigeria President Muhammadu Buhari has paid tribute to Samuel Okwaraji’s mother who died at the age of 83 on Monday.

Lady Janet Okwaraji was a retired teacher, a school proprietress and a devout Christian before her death was confirmed by her eldest son, Patrick.

She lost her son Samuel, who was a Nigeria midfielder, during a Fifa World Cup qualifying match against Angola on August 12, 1989.

A month ago, the Minister of Youth and Sports Development, Sunday Dare assured the Okwaraji’s family of improved welfare packages from the government while the Nigeria Football Federation announced a monthly stipend of N30,000 for the matriarch and Rashidi Yekini’s mother.

In a message released by his Special Adviser on Media and Publicity Femi Adesina, President Buhari praised Lady Janet for her resilience after the death of her son at the National Stadium in Lagos.

“President Muhammadu Buhari condoles with family of Lady Janet Okwaraji, a teacher and school proprietress, who passed on at 83, leaving a lasting memory of kindness, love and charity as a devout Christian,” the condolence note read.

“The President believes Lady Okwaraji, whose son, Samuel, died in August 1989 while playing for the Super Eagles in a World Cup qualifier, will always be remembered for the sacrifices of the family for the nation.

“President Buhari affirms that the matriarch of the Okwaraji family, like her son, defined simplicity, loyalty and patriotism in many ways as she remained steadfast, believing in Nigeria, despite the vicissitude of life.

“As a mother, who lost her son in an unexpected situation, the President believes Lady Janet deserved to be acknowledged for her resilience and nobility, despite the odds.

“President Buhari prays that the almighty God will grant her soul eternal rest, and comfort her loved ones.”

Pastor Rapes 19-Year-Old During Deliverance In The Church