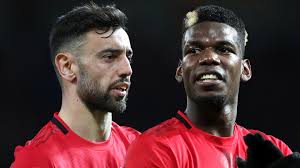 Ole Gunnar Solskjaer is looking forward to seeing more of Paul Pogba in Manchester United’s starting XI after his successful return from injury against Tottenham.

The midfielder made an instant impact off the bench in the final half hour during the 1-1 draw on Friday night – in his first appearance since Boxing Day.

Manchester United were trailing to Steven Bergwijn’s first-half strike and it was Pogba who won the decisive penalty which earned his side a vital point as his neat footwork got the better of Eric Dier.

Plenty had been said about the Frenchman’s long-term future at Old Trafford with some doubting the midfielder would ever play for the club again, but Solskjaer is happy to have the World Cup-winning midfielder back.

“I think Paul always has a point to prove to himself and us. He expects a lot. He wants to be the best, loves football and has had such a frustrating season with his injuries,” Solskjaer said.

“There’ll always be talk about big players. For me, Paul’s shown today how he can contribute. He tackled, won the ball, created chances and had the skill to win us a penalty. I look forward to getting him fitter and gradually we’ll see him more and more.

“It’s not a problem having a fit Paul Pogba in the squad, we’re delighted to have him back.”

The match saw Pogba play alongside January signing Bruno Fernandes for the first time, with the two making the difference as the Portuguese midfielder finished off the penalty that Pogba won.

And Solskjaer is looking forward to having the two grow together, having gotten a taste of what they can do.

“It is a definite partnership that we want to build on,” he told BBC Radio. “They have trained together now they have had half an hour on the pitch together.

“We want the best players on the pitch of course and want to find a balance in the team.”

He added: “[Pogba] has had a horrific injury-hit season and he is desperate to make up for the lost time.

“It is great to see him show his qualities and the contribution he made was big in us getting a penalty. I think he showed how good he is as an all-round midfielder.”

Pogba, Fernandes and Manchester United will face Sheffield United on Wednesday in their next Premier League match.

‘I enjoy seducing men with my body’ - Amara Maduka