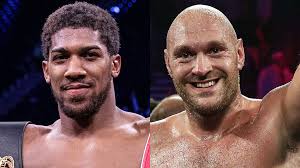 Anthony Joshua’s blockbuster battle with Tyson Fury will not have the WBO belt at stake unless Oleksandr Usyk receives a title shot first, the Ukrainian’s promoter has warned.

IBF, WBA and WBO heavyweight champion Joshua has agreed financial terms to meet WBC titleholder Fury twice next year in mega-fights that would have every divisional title on the line.

But Usyk, the WBO mandatory challenger, is also owed his chance and if he is overlooked by Joshua in favour of fighting Fury instead, that belt could become vacant.

Joshua will next face IBF mandatory challenger Kubrat Pulev while Fury meets Deontay Wilder for the third time. But Usyk, who is expected to face Derek Chisora in the meantime, intends to throw a spanner into the works of their planned undisputed showdown.

“Usyk’s WBO mandatory had to happen before AJ vs Pulev,” his promoter Alexander Krassyuk, who works alongside Eddie Hearn, told Sky Sports.

“But we were flexible and did not put much pressure on, allowing AJ to complete his IBF mandatory while Usyk fights Chisora.

“But this was made with regards that the WBO champ (whoever he is after AJ vs Pulev) has to make his mandatory versus Usyk.

“It means that either Joshua fights Usyk first or fights Fury without the WBO belt.”

Usyk intends to take advantage of his mandated opportunity “within the shortest period of time”.

Joshua described Usyk as a “very credible opponent” after regaining his titles from Andy Ruiz Jr in December.

Joshua told Sky Sports: “When I’m trying to build my record, I want opponents like Usyk to say that I’ve defeated them.

“He uses his feet very well, and positions his hands well. You can’t hit him because his feet move so well. If you do manage to catch him, [the punches] are brushing off the gloves.

“What I’d do, as I have done already, is study him – from his footwork, his hand positioning, to his openings.

“Then I’d go to former people who have faced him and find out information on how to defeat him.

“Usyk is a great cruiserweight, the undisputed cruiserweight champion, who has decided to move up to heavyweight to mix it with the big boys.

“He’s still exploring the division but he wants a piece of the big pie – he’s more than welcome to try to take this out of my hands.”

The undefeated pound-for-pound phenom Usyk claimed every cruiserweight title and the World Boxing Super Series trophy after winning a gold medal alongside Joshua at the 2012 Olympics.

After only one fight in the heavyweight division he is ranked as the WBO’s No 1 challenger ahead of former champion Joseph Parker and rising British contender Daniel Dubois.

Parker’s trainer Kevin Barry told Sky Sports earlier this year about the possibility of meeting Usyk for a vacant belt: “If that was going to happen, we were going to get the fight with Usyk that we were very, very keen on and one that we’re very confident in.”

Parker’s manager David Higgins added: “Absolutely Joe would fight him, as long as the Usyk team recognise and understand that they are the B-side, there’s no problem.

“I think Joseph Parker has a better chance against Usyk than, say, Anthony Joshua. I think Usyk would dissect Anthony Joshua who is too big and slow, whereas Parker is quick. We haven’t seen the best of Joseph yet.

“It’s a very good fight and we really respect their team, but we are the A-side, and as long as they are willing to accept a small percentage of the revenue, then there might be a deal.”

Usyk’s promoter Krassyuk said earlier this year: “In case it turns out that the WBO titl