Novak Djokovic has left Australia after having his visa canceled over his Covid vaccination status – and tennis leaders and some of his fellow stars have given their reaction to the Australian Open champion’s ordeal.

Hours after a court upheld the decision by Minister for Immigration Alex Hawke to oust Djokovic from the country; the sporting icon was pictured walking through Melbourne’s Tullamarine Airport while wearing a mask.

Further photos purportedly showed border force officials escorting; the world’s top male tennis player in a lounge ahead of his enforced return to Europe via Dubai.

The snaps provided a stark contrast to the self-portrait Djokovic supplied on social media on January 4; when the 34-year-old pictured himself looking happy with his luggage as he announced that; he would be heading to the tournament with a medical exemption.

That swiftly turned sour when officials interrogated Djokovic after he arrived in Australia and informed him that; he would not be allowed to stay in the country despite his belief that he could do so without being vaccinated; as a result of testing positive for Covid in December 2021.

Djokovic was detained in a hotel and briefly freed by a judge; only for Hawke to cancel the world number one’s visa for a second time in a decision that was upheld by a court on Sunday.

Tennis governing body the ATP described the saga and ruling as “deeply regrettable”.

I welcome today’s unanimous decision by the Full Federal Court of Australia; upholding my decision to exercise my power under the Migration Act to cancel Mr Novak Djokovic’s visa in the public interest. I can confirm that Mr Djokovic has now departed Australia. pic.twitter.com/8CapwFeDCS

“Ultimately, decisions of legal authorities regarding matters of public health must be respected,” bosses said in a statement after learning that Djokovic will not appear at the first Grand Slam event of 2022.

“More time is required to take stock of the facts and to take the learnings from this situation.

“Irrespective of how this point has been reached; Novak is one of our sport’s greatest champions and his absence from the Australian Open is a loss for the game.

“We know how turbulent the recent days have been for Novak and how much he wanted to defend his title in Melbourne. We wish him well and look forward to seeing him back on court soon.” 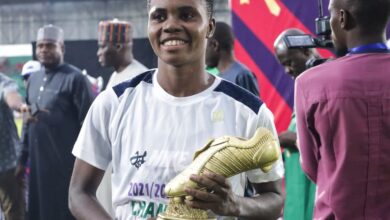