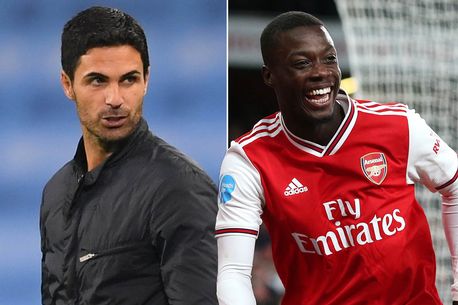 Nicolas Pepe made it two goals in three games for Arsenal after scoring a penalty against Sheffield United in the FA Cup quarter-finals on Sunday.

The Ivory Coast international had scored a sublime goal in the Gunners 2-1 loss against Brighton and Hove Albion last weekend with the assist coming from Anglo-Nigerian wideman Bukayo Saka.

This time, Alexandre Lacazette was brought down in the box by Chris Basham in the first half and referee Paul Tierney wasted no time in pointing to the spot. Pepe stepped up and dispatched with ease.

Sheffield equalised in the 87th minute via David McGoldrick, but Real Madrid loanee Daniel Ceballos saved the game from going into extra time with the winner in injury time.

It was Pepe’s second successful penalty conversion for Arsenal after netting his first in a 3-2 comeback Premier League home win over Aston Villa on September 22, 2019. It was also his first goal for the north London club on that occasion.

The goal at Bramall Lane means Pepe has now scored 12 of his last 13 penalties dating back to his time with Lille. Arsenal have equally been successful in 12 of their last 13 spot-kicks.

This strong record is a ray of light for Pepe who has been criticised for not living up to expectations since his record £72 million move from Lille last summer.

Though he has played 34 times in all competitions, he has scored only seven goals and provided eight assists, which is a very low standard compared to his final season with Lille where he had a hand in 35 competitive goals (23 goals, 12 assists) in 41 outings.

Pepe’s most notable goals for Arsenal this season came in a 3-2 win over Vitoria Guimaraes in the group phase of the Europe League. The Gunners were down 2-1 and Pepe came on for Lacazette 15 minutes from time and scored a fantastic brace in the 88th and 90th minutes, his second being a delicious free-kick deep in injury time.

Arsenal’s next challenge will come at the Emirates Stadium against Norwich City in the Premier League on Wednesday evening.