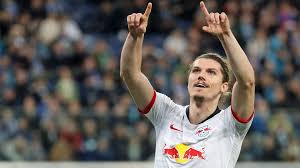 Arsenal and Tottenham Hotspur are among the teams with an interest in RB Leipzig midfielder Marcel Sabitzer.

But the 26-year-old has indicated that he would like to stay with Leipzig for at least another year.

He told Bundesliga.com: “Yeah, as I said, we’re a young team so it’s not always easy – especially when a lot of noise comes from outside, asking whether we’ll win the league, can we do it, all that.

“So that adds a bit of pressure and perhaps one or two people think about it too much and it holds you back a bit.

“We’ve experienced that now, and we have to learn how to deal with it. And next year we want to go for it again, if possible.”

“I was a striker in my early days or a No.10, so I wasn’t usually far away from the goal, and this season it started like that again. I was playing in a lot of offensive positions compared to the last couple of years.

“I’ve just found my instinct again, the runs to make, finishing, long shots, the whole package for an attacking midfielder.

“Now since the winter break, my role has been a bit deeper, playing as a defensive midfielder really, and so it’s harder to get forward. But I’m trying my best to get a goal or an assist now and then.”

Gerrard: Liverpool should ‘start working on a statue’ for Klopp ahead of title coronation