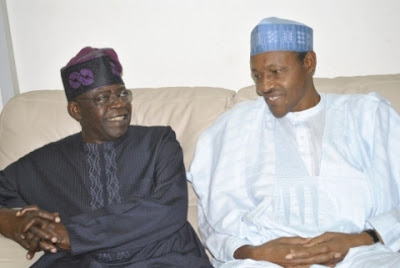 Yet another attempt at welding together an alliance to defeat a ruling dominant party is underway.
This time, the chief protagonists are Chief Bola Ahmed Tinubu’s Action Congress of Nigeria (ACN) and retired General Muhammadu Buhari’s Congress for Progressive Change (CPC).

Since independence, it has become part ofNigeria’s political history that between general elections contending smaller political parties will try to gang-up against the usual dominant ruling party.

We saw it in the First Republic when the United Progressive Grand Alliance (UPGA) consisting mainly of the National Council for Nigerian Citizens (NCNC) and the Action Group, tried to upstage northern regional giant and ruling party at the Centre, the Northern People’s Congress (NPC).

It collapsed because the UPGA leaders could not sink their ambitions and differences. In the SecondRepublic, the National Party of Nigeria (NPN) emerged as the dominant national ruling party, while four others – the Nigerian People’s Party (NPP), the Unity Party of Nigeria (UPN), the People’s Redemption Party (PRP) and the Great Nigerian People’s Party (GNPP) formed a group called the People’s Progressive Alliance (PPA).

The effort also failed. At the ensuing 1983 general elections, the NPN not only won the election but also became even more mammoth, thus triggering fears ofNigeriabecoming a one-party state.
In the 1998/1999 transitional politics, the People’s Democratic Party (PDP) had established an early dominance and national spread. It had already won some of the staggered provincial polls.

In order to attempt to head off its imminent emergence as the dominant national party, two regional rivals – theAlliancefor Democracy (AD), which had swept the South West, created a strange contraption of a merger with the All People’s Party (APP).

The merger was only for the presidential election. Dr Ogbonnaya Onu, a surrogate of Alhaji Umaru Shinkafi, won the APP primaries inKaduna, while Chief Olu Falae won the AD presidential ticket in Ibadan.

Onu was forced to step down for Shinkafi, who agreed to run as the Vice President to Falae, while the party platform adopted was the APP. Falae became the presidential candidate of a party he was neither a member nor contested for its presidential ticket!

See what I mean by “strange”? Even stranger still, the regime of General Abdulsalami Abubakar accepted the arrangement in its resolve not to give the Yoruba reason to boycott the transition. PDP went ahead to win by a landslide.

Plotting against the PDP
The proposed alliance or merger this time has the ACN and CPC plotting against an entrenched election winning machine and national party, the PDP. It will be another uphill task at the least.
For one, the calculations that started the two sides into this venture is, as far as I am concerned, fallacious.

Based on the National Population Commission (NPC’s) figures awarding theNorth West 37 million and South West 27 million people, it was assumed that an alliance of parties in control of the two zones would upstage PDP and produce a president of Nigeria.

The difficult question will be: who produces the president? Will it be the bigger party, the ACN which controls six states in two geopolitical zones, or the CPC, a minority party with only one state in North Central?

Will Buhari sink his presidential ambition for ACN’s choice, possibly Raji Fashola or Adams Oshiomhole? Or will a man who has proved incapable of getting majority votes in the North insist on being the flag-bearer and lead the alliance to another defeat?

If ACN produces the presidential candidate, will Buhari’s fanatical supporters in the Muslim North agree to vote for him?

If Buhari inherits the leadership of theAlliance and by a stroke of outside luck they win, Tinubu will have to bid his little political fiefdom goodbye. Experiences in the NPC, NPN and Shehu Yar’Adua’s People Front of Nigeria (PFN) showed Fulani-controlled parties never share power. they simply take over. Is Tinubu willing to risk that?

Revolutionary behaviourial shift
The question of ideology will not be an impediment because Nigerian political parties are not interested in that. But the question of ethnic and sectional mindsets will. CPC is a northern Muslim radical party, with Buhari as its sole raison d’etre and inspiration.

ACN is a modern political party for now based chiefly in the South West with a leg inEdo. It has done a lot to whittle down the regional appeal of the Awoist parties of old. If it fields an acceptable candidate such as Fashola, Oshiomhole or Senator Chris Ngige it will sell.

The ACN will perform a lot better if it continues to improve on its national spread rather than dissipate efforts trying to ally with a CPC that is unlikely to even concede the presidency to it.
These two parties do not really share anything beyond the common desire to wrest power from the PDP. The PDP has become so entrenched that it is in a position, with its enormous powers of incumbency, to infiltrate the alliance and unsettle it from within.

PDP will still bank heavily on the political behaviour of Nigerians which tends to favour the ruling party at the polls, especially for the presidency. It will require a major revolutionary shift in this behaviour for the electorate to summon a collective national effort and vote out a sitting president.
However, let the two parties go on and try their luck. You never can tell. Miracles still do happen.