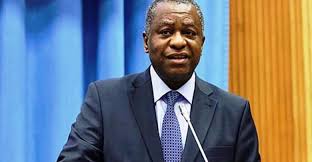 Foreign Affairs Minister, Geoffrey Onyeama has revealed that the visa ban imposed on Nigeria by the Donald Trump administration; came as a surprise, even as he noted that the Nigerian government was blindsided by the announcement.

Onyeama was speaking on Tuesday at a meeting with the United States Secretary of State, Mike Pompeo.

The Foreign Affairs Minister revealed that he only learnt of the visa ban as he prepared to visit Washington; for an annual meeting between the United States and Nigeria this week billed by the State Department as seeking to; “expand cooperation and advance shared goals.”

“We were somewhat blindsided with the announcement of the visa restrictions by the U.S. But we know — and the U.S. officials have also confirmed; that we have been able to tick most of those boxes,’’ Onyeama disclosed.

Meanwhile, Onyeama told journalists at the State Department that the Nigerian government was already working to address the security concerns; notably those that Trump administration officials said had prompted the decision, announced last week; to reject visas for Nigerians seeking to immigrate to the United States.

Further, he revealed that the moves by the Nigerian government to have the ban rescinded included a number of efforts; among which are to directly share personal data –  including immigrants’ criminal histories; stolen passport information and suspected links to terrorism — with the United States and Interpol member countries.

“Hopefully, once that has been achieved, we look forward to being taken off this visa restriction list,” Onyeama said.

On his part, Pompeo also expressed optimism of a quick resolution of the issues that led to the visa ban.

“Nigeria has room to grow in sharing important national security information. I am optimistic that’s going to happen,” Pompeo said.

Indeed, 1st News had reported that Nigeria had been listed among six new countries imposed with a visa ban; by US President, Trump. Specifically, the visa ban meant that immigration from Nigeria is no longer possible. Other countries –  Eritrea, Myanmar and Kyrgyzstan were also banned from applying for visas to migrate under the policy. On the other hand, Sudan and Tanzania will be barred from participating in the diversity visa lottery; which randomly awards green cards to 50,000 immigrants annually.

Additionally, 1st News had reported that the Trump administration based its decision on the need to tighten security; especially for countries that fail to comply with U.S. minimum security standards or cooperate to prevent illegal immigration.

The visa ban on Nigeria takes effect on February 22, 2020. Nevertheless, it will not prevent travel by Nigerians coming to the United States on student and certain employment visas.