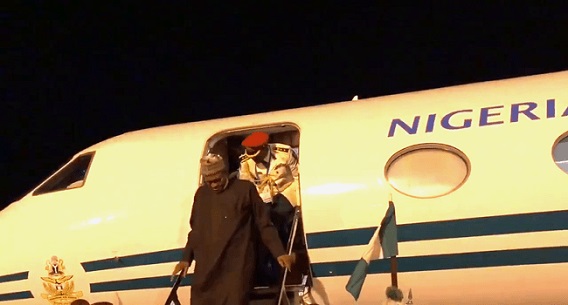 The Presidency has defended the frequent trips abroad by President Muhammadu Buhari; stating it is necessary for the benefit of the nation’s economy.

This was contained in a statement issued by the spokesman of Buhari; Garba Shehu during an interview on Channels Television’s Sunday Politics.

Shehu said, “The President’s trips are not sightseeing trips, they are justified by outcomes.

“In each of the trips, we try to let Nigerians know what the things the president has achieved; and so, we are making progress; the economy needs the trips because much of it actually comes on account of who the president is.”

He has embarked on eight different trips, one each to Burkina Faso; New York; South Africa; Japan; Russia; and the United Kingdom.

He traveled twice to Saudi.

His recent trip – to Saudi Arabia and the United Kingdom – will last 21 days. He is expected to return on November 17.
By the end of his trip to Saudi; Buhari would have traveled out of the country for 48 days since he was sworn in for a second term on May 29.

Despite the country’s deteriorating economy; the president’s frequent travels cost taxpayers at least N1 billion on local and foreign trips, according to the 2019 fiscal year budget.

But Shehu said the president’s trip has portrayed him to investors as a serious man who is ready for business.

“I think Nigerians should comfort themselves in the fact that they have a President who is respected around the globe; and the name of whom can fetch a lot of good things for Nigerians,” Shehu said.

Shehu said the constitution of Nigeria is very clear. It says that 21 days is the period of absence which cannot be justified.

He, however, said the trip to the United Kingdom is partly for vacation and also for work.

“He is on a private trip outside the country, partly on vacation, partly at work.”