Rivers Safer With Fubara As My Successor-Wike 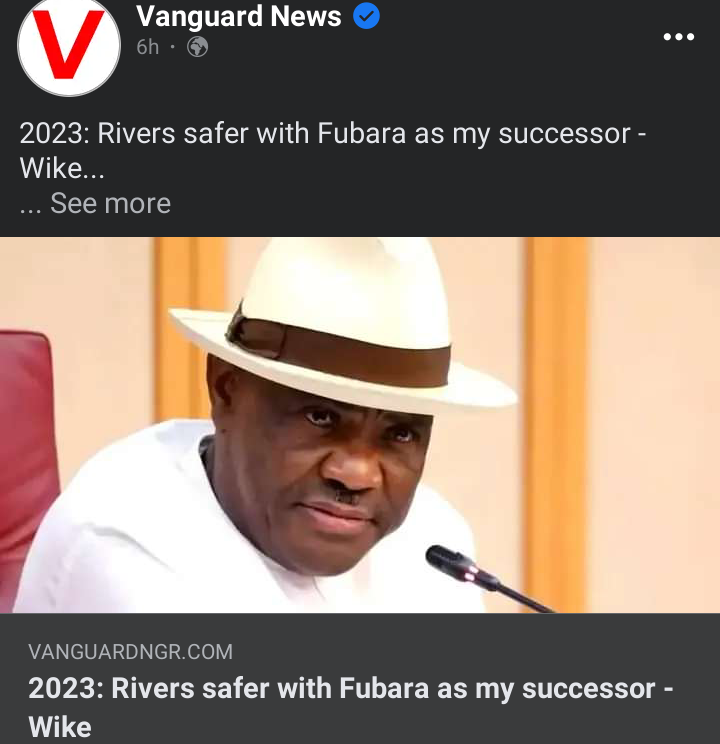 RIVERS State governor, Nyesom Wike, has said the state would be safer in the hands of Peoples Democratic Party (PDP) governorship candidate, Sir. Siminialayi Fubara as his successor.

Wike at the Kelechi Nwogu Legacy Stadium’s campaign rally of Rivers PDP for Omuma Local Government Area on Monday said both the PDP guber candidate and his deputy are seasoned technocrats with vast experience and capacity to consolidate on the gains made already while continuing in the same development trajectory.

He said after fulfilling the development promises he made to the Omuma people in 2015 and continuing in 2019, he has returned asked for electoral support from them for Fubara with the confidence that such support would secure more development for them.

APC Has Brought Down Nigeria_ Atiku 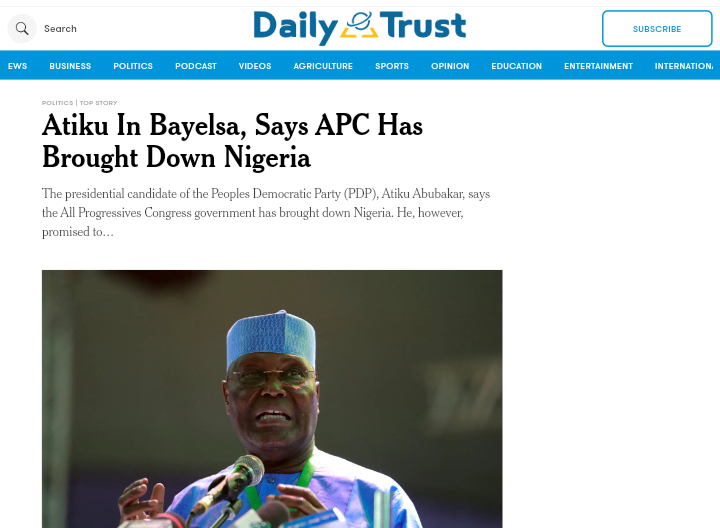 The presidential candidate of the Peoples Democratic Party (PDP), Atiku Abubakar, says the All Progressives Congress government has brought down Nigeria.

He, however, promised to carry every part of the country along if elected president next month.

Speaking at the PDP presidential campaign rally in Yenagoa, the Bayelsa state Capital on Monday, Atiku who promised to implement his five key programmes, added that the country had never been this divided.

He promised that his administration would unify everyone to work for the development of the country.

The former vice president also told the supporters that he would restructure the country to end the clamour for restructuring across the country, saying that the Niger Delta needs restructuring of the country more than any other zone, as it would solve many of the challenges in the region. 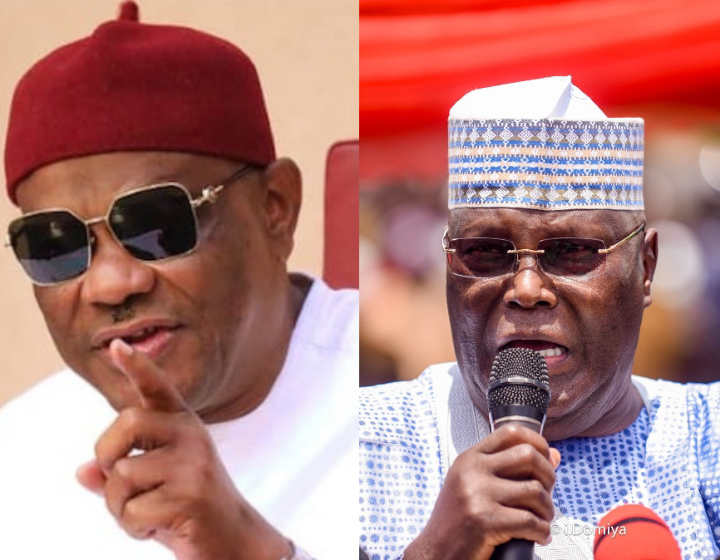 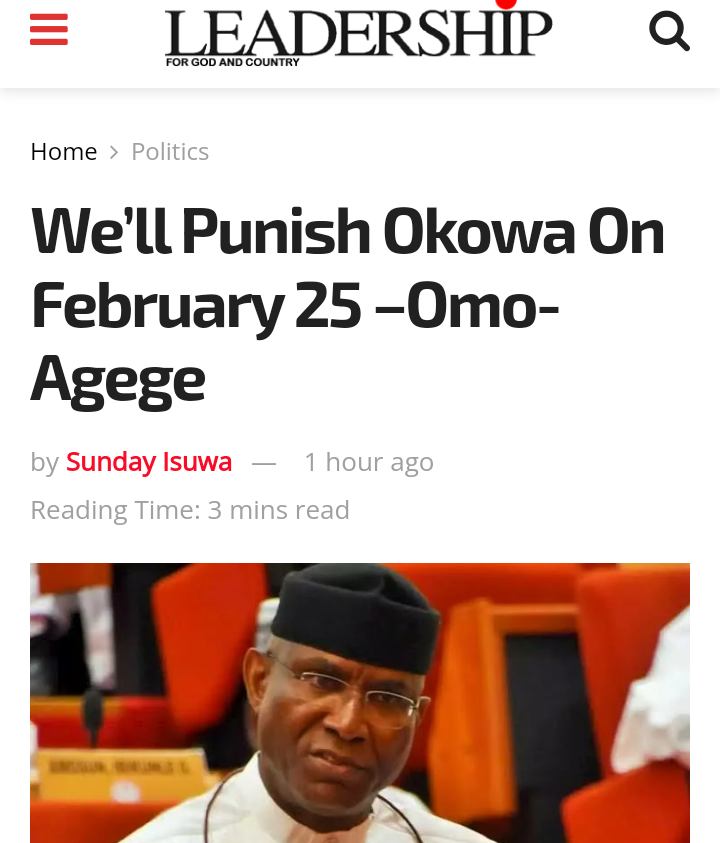 Deputy Senate President and the gubernatorial candidate of the All Progressives Congress (APC) in Delta State, Ovie Omo-Agege has said the electorate will punish Governor Ifeanyi Okowa over non-performance in the state in the forthcoming presidential election. Okowa is the running mate to the People’s Democratic Party (PDP) presidential candidate Atiku Abubakar.

Omo-Agege stated this at St George’s College in Obinoba community in Delta North during the flag off of his gubernatorial campaign.

According to Omo-Agege, the poor performance of Okowa in Delta State, a state he said received N4.2 trillion in the last seven years, and the division within the PDP has already given APC victory ahead of the polls.

Omo-Agege said the people of Delta State are now determined to ensure that the APC win all the three senatorial districts and the governorship poll in order to punish Okowa. 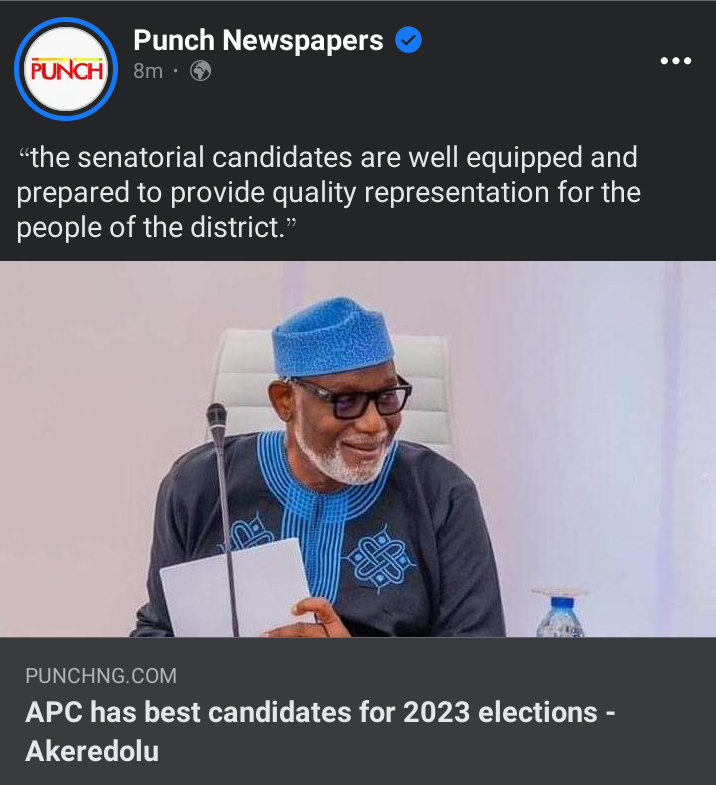 The Ondo State Governor, Rotimi Akeredolu, on Monday, urged the people of the Southern Senatorial District of the state to vote for the All Progressives Congress candidates in the forthcoming general elections.

Akeredolu said the party paraded the best candidates from its presidential flagbearer, Bola Tinubu, and his running mate, Senator Kashim Shettima, the Senatorial candidate, Dr. Jimoh Ibrahim, and the three House of Representatives candidates as well as the nine House of Assembly candidates in the district.

The governor canvassed for the votes during the campaign rally held at Methodist Primary School, Okitipupa, Okitipupa Local Government Area.

According to the governor, only candidates of the APC can deliver good governance to the people of the state and the country at large.

2023 Election: Why Arewa Is Dialoguing With Ohanaeze Ndigbo – Hakeem Baba-Ahmed