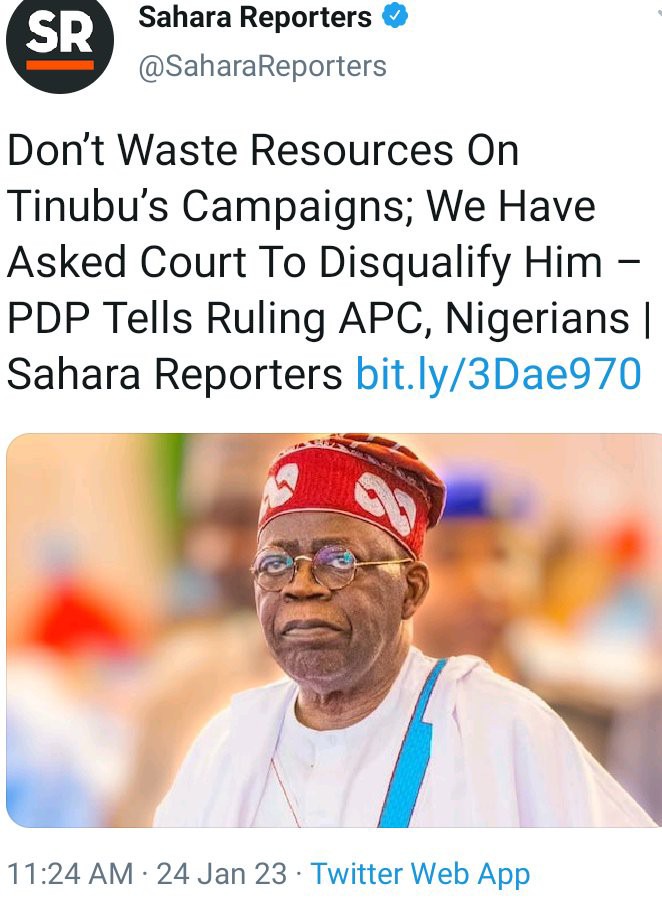 With just 32 days to the 2023 general elections, the Peoples Democratic Party (PDP) presidential campaign council said that it has asked a court of competent jurisdiction in the country to disqualify the presidential candidate of the ruling All Progressives Congress (APC), Bola Tinubu, from the presidential race.

The PDP presidential campaign spokesperson, Kola Ologbondiyan, who made this known in a media conference on Monday in Abuja, said Tinubu’s forfeiture of his funds to the US government over drug trafficking allegation was an indication that the former Lagos State governor committed infractions that should disqualify him from running for an election in Nigeria.

SaharaReporters has reported how court papers from the US linked Tinubu to a drug trafficking case and his eventual forfeiture of the sum of $460,000 to the US government.

I Have Not Disappointed Anybody – Buhari.﻿ 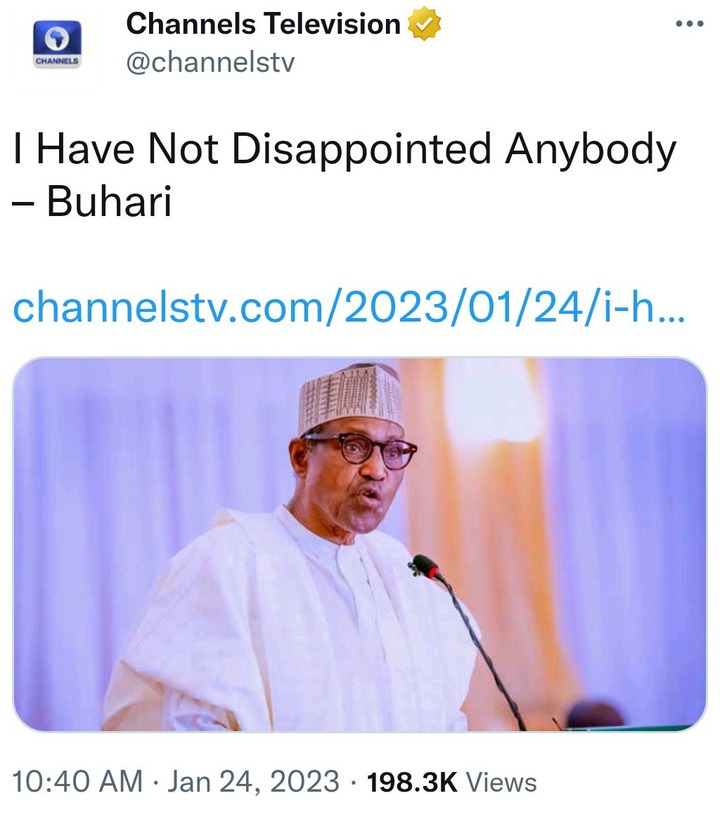 President Muhammadu Buhari on Monday said he has served Nigerians to the best of his ability, stressing that he has not disappointed anyone. 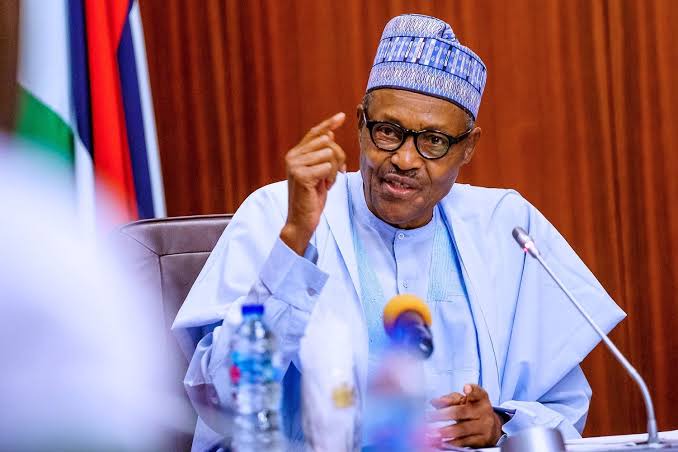 The President stated this during a courtesy call on the Emir of Bauchi, His Royal Highness (Dr) Rilwanu Suleiman Adamu in continuation of the All Progressives Congress (APC) presidential and gubernatorial campaign rallies.

2023 elections will be different, Rivers cannot be intimidated – Wike﻿. 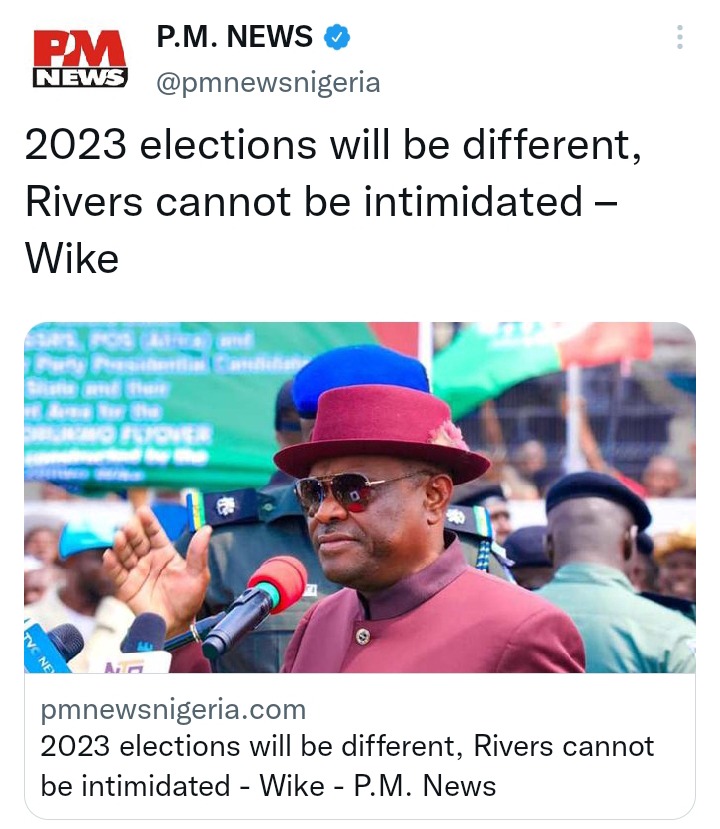 Governor Nyesom Ezenwo Wike has urged the people of Rivers State to stand firm while supporting the bid to protect the state.

The governor noted that Rivers State cannot be intimidated, no matter the gang-up.

Wike spoke at the Kelechi Nwogu Legacy Stadium, the venue of the campaign flag-off rally of the Rivers State PDP for Omuma Local Government Area on Monday. 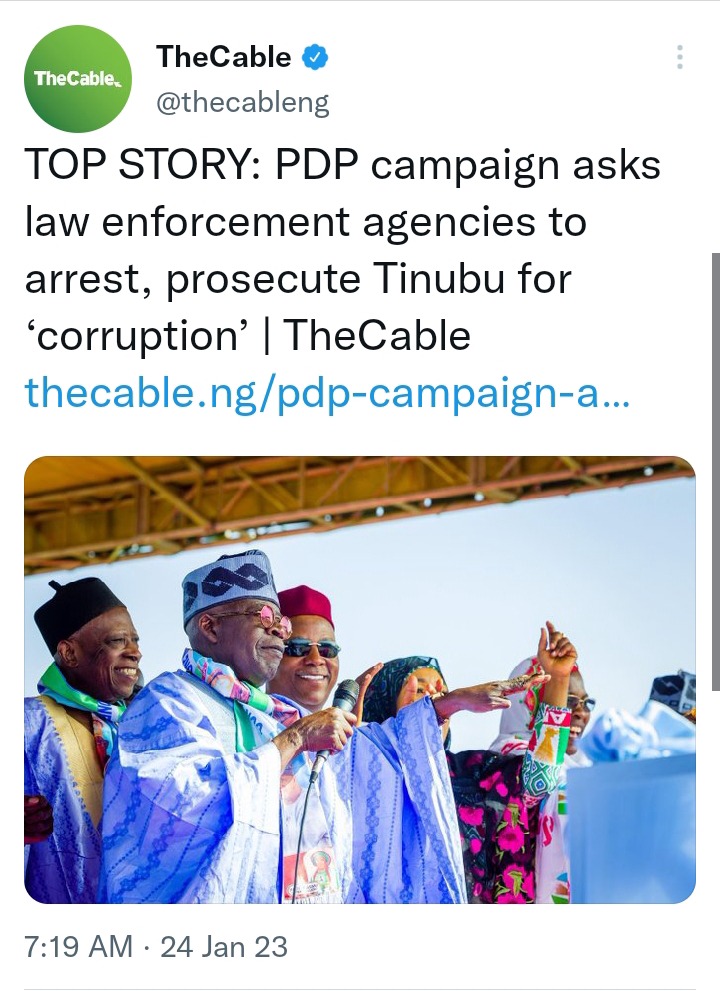 Daniel Bwala, spokesperson of the PDP campaign, made the demand at a press conference on Sunday in Abuja.

Bwala said the demand was based on drug proceeds allegedly forfeited by Tinubu in the US and other corruption allegations against him.

No One Can Stop 2023 Elections In South-East States; We Have Superior Weapons – Nigerian Army 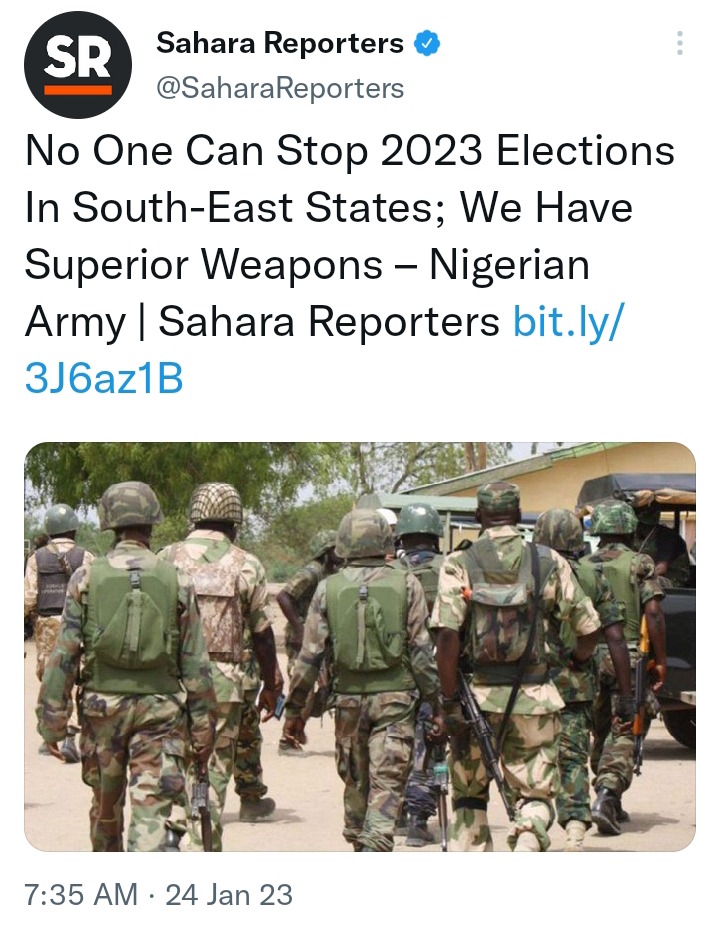 The Nigerian Army has said that gunmen terrorising the South-East region of the country cannot stop the forthcoming 2023 general elections in the region because they do not have what it takes to carry out their threats.

The Nigerian Army said that the armed criminals who had been threatening to stop the general elections from holding within the region could not overpower the military and other security agencies during the elections.

The Commanding Officer, 24 Support Engineering Regiment, Abakaliki, Lt. Col. Sunday Atomode, who said this a media in a chat with newsmen in Abakaliki, Ebonyi State capital, maintained that the elections would not only hold in Ebonyi State and other South-East states. 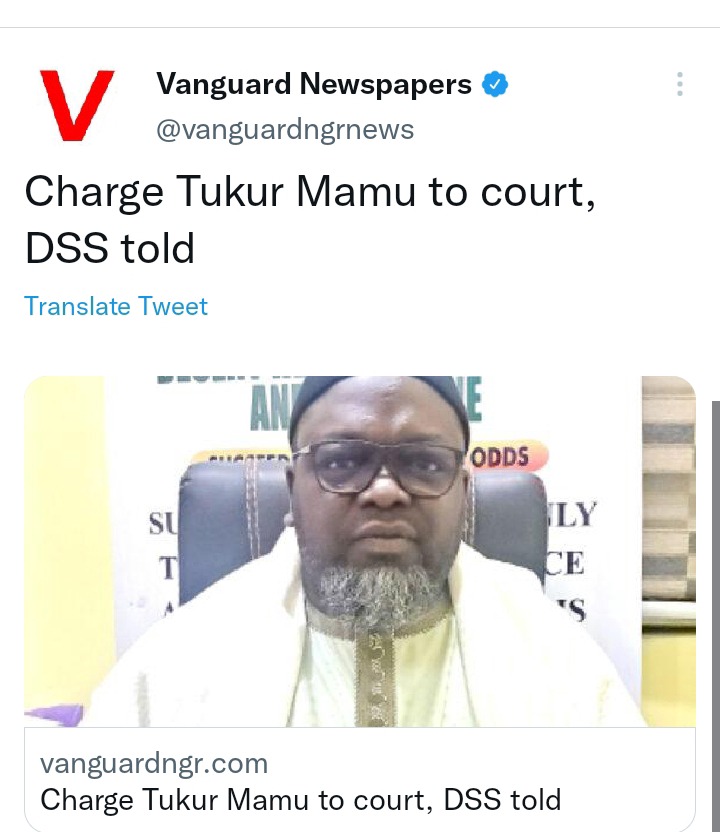 The Kaduna State High Court presided over by Justice Edward Andow has ordered the Department of State Services (DSS) to charge the former lead negotiator for the Abuja-Kaduna train victims, Malam Tukur Mamu to Court.

The judge ordered the DSS to charge Mamu to court immediately if any offence was discovered about him regarding his alleged involvement in ransom negotiation on behalf of the terrorists.

Mamu has been with the DSS since his arrest in Cairo, Egypt on September 6, 2022 on his way to Saudi Arabia for the lesser Hajj together with some of his family members.