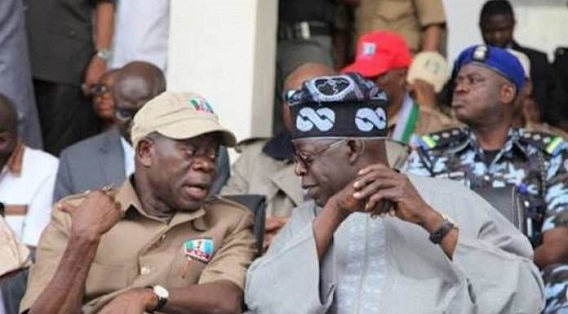 The national leader of the All Progressives Congress (APC); Bola Tinubu, has highlighted reasons why plots to remove the party’s chairman, Adams Oshiomhole, are not justified.

This was contained in a statement issued by the APC National Leader on Sunday, March 15.

It is also coming against the backdrop of the leadership crisis rocking the ruling party.

1st News had reported the travails of Oshimhole who was suspended as the party’s head by an Abuja high court.

Also, the national secretary of the party; Victor Giadom, has called for a meeting of the National Executive Committee on Tuesday, March 17.

Ahead of the meeting, some South-South leaders and ministers in President Muhammadu Buhari’s cabinet have reportedly endorsed Giadom as the Acting Chairman of the party.

However, in a move showcasing strong support for Oshiomhole; Tinubu stated reasons why the present plot to undermine the APC National Chairman is condemnable.

He noted that Oshiomhole is human; thus, he has his merits as well as his flaws.

Tinubu further noted Oshiomhole as a tireless campaigner and mobilizer for the party.

“He has steered the party through difficult elections. His contributions should not be undervalued now that the bulk of elections are behind us. To do so would be an act of ingratitude.

“It is no secret that the Chairman and Edo Governor Obaseki are in dispute. This is unfortunate.”

He, however, added that the party has moved through proper procedures within the proper organs of the party to hopefully resolve this spat.

“All party members know this. Such decisions are part and parcel of internal party governance. Yet, motivated by ambitions that have nothing to do with the quality of the chairman’s performance, people shunned the agreed party reconciliation mechanism and resorted to other means to oust him.”

“These self-help attempts are unwarranted. These attempts reveal more about the perpetrators than they do about the chairman,” Tinubu’s statement read in part.