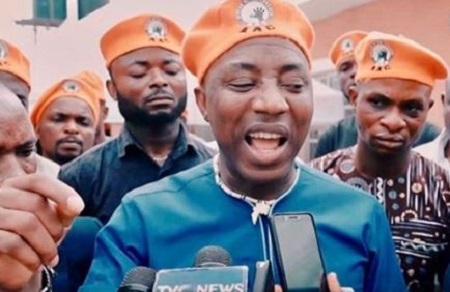 The protesters said their demands had been broken down into three phases, each of which contains issues that must be addressed.

Youths and facilitators under the auspices of the Global Coalition for Security and Democracy in Nigeria on Monday, August 4, defied threats of security agencies to hold the ‘Revolution Now’ protest in four states of the country and Abuja

It would be recalled that on Saturday, August 3, the State Security Service arrested the publisher of popular media organisation Sahara Reporters, Omoyele Sowore.

The SSS said Sowore was arrested for calling for revolution against the present administration.

Sowore who contested for presidency in the 2019 general election in series of recent video clips decried the governance pattern of the present administration.

Meanwhile, the Nigeria Police also warned that Revolution Now protesters would be made to face the wrath of the law.

Despite the threats, several Civil Society Organizations (CSO) maintained a ‘no-going-back’ stance despite Sowore being in detention and the warning from police.

The protesters said their demands had been broken down into three phases, each of which contains issues that must be addressed.

The three phases are as follows:

* Return of fuel prices and electricity tariffs to their levels in 1999.

* End to estimated and inflated billing by the electricity distribution companies

* No devaluation of the Naira.

* End to the insecurity and constant bloodletting in the country

* Abolition of tuition fees in all public universities and secondary schools.

* The immediate release of all political prisoners, including Shi’ite leader Ibrahim El-Zakzaky and his wife

* The immediate payment of all outstanding salaries of workers and pensions of retirees.

* All public officials must be banned from educating their children in private schools in Nigeria or in schools in foreign countries.

* These officials must be banned also from obtaining healthcare in private hospitals in Nigeria or in hospitals in foreign countries.

* An immediate end to the use of police or military personnel as private security guards for these officials.

* Except for the president and governors, these officials and their immediate family must not live in class-exclusive estates

* The complete and uncompensated seizure by the working people of all private wealth accumulated by public officials during and after their tenure of service.

* The complete socialisation of all land in the country and declaration of access to land as a basic right.

* To break the stranglehold of the ruling class on political power by banning from politics all who have stolen the people’s money and property since 1960.

* To reduce the cost of governance by abolishing the Senate, thus establishing a uni-cameral legislature with only the House of Representatives.

* Abolishing the death penalty except for the embezzling or privatisation of the public wealth.

* Producing a new constitution for Nigeria by a democratic and people-led process involving open discussion, debate, and determination of proposals and suggestions by the working people.