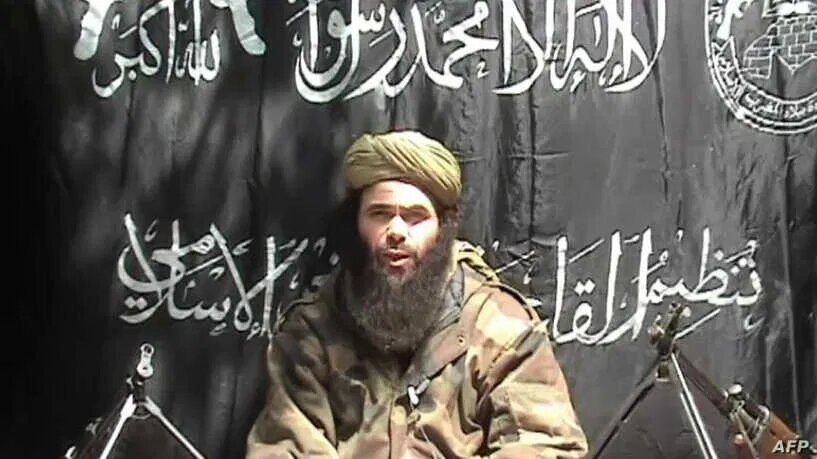 (FILES) This handout file photo provided on May 10, 2007 by IntelCenter shows a video frame broadcast by the Arabic news channel Al-Jazeera on May 8, 2007 and released by al-Qaeda of the purported chief of the Al-Qaeda branch in North Africa, Abdelmalek Droukdel, aka Abu Musab Abdul Wadud, addressing his followers in a video tape on the April 11 attacks in Algiers that killed 30 people and wounded more than 220 others. – Al-Qaeda in the Islamic Maghreb (AQIM) chief Abdelmalek Droukdel was killed on June 5, 2020 in Mali. (Photo by – / IntelCenter / AFP) / RESTRICTED TO EDITORIAL USE – MANDATORY CREDIT “AFP PHOTO/ INTELCENTER ” – NO MARKETING – NO ADVERTISING CAMPAIGNS – DISTRIBUTED AS A SERVICE TO CLIENTS

The French military says it has killed Abdelmalek Droukdel, the leader of al-Qaeda in north Africa.

Droukdel, known as the emir of al-Qaeda in the Islamic Maghreb, was killed in an operation on Wednesday in northern Mali, along with several people in his entourage, French defence minister Florence Parly said.

Droukdel commanded jihadists in his native Algeria and then spread their movement across Africa’s Sahel region.
Other anti-terrorist operations in the region also led to the arrest of Mohamed el Mrabat on May 19, a major figure in the Islamic State in the Grand Sahara, Ms Parly said. She said the operations had dealt a “severe blow” to terrorist groups in the region which have been operating for years despite the presence of thousands of French, UN and other African troops.

“This essential fight for peace and stability in the region has just been a major success,” Ms Parly said. “I congratulate and thank all those who have enabled and carried out these daring operations, which severely strike these terrorist groups. Our forces, in cooperation with their partners in the Sahel, will continue to hunt them relentlessly.”
Droukdel fought in Algeria’s civil war in the 1990s and allied the Algerian jihadist group GSPC with al Qaida in 2006. Under his leadership, al-Qaeda claimed responsibility for several deadly attacks across Algeria. Ms Parly identified him as a member of al Qaida’s “management committee”.

Abdelmalek Droukdel, aka Abu Musab Abdul Wadud, addressing his followers in a video tape on the April 11 attacks in Algiers that killed 30 people and wounded more than 220 others.