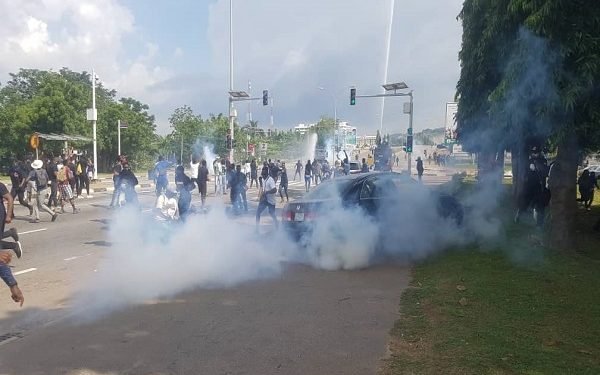 Nigerians protesting against police brutality in Abuja under the #EndSARS movement were on Wednesday attacked by armed thugs.

Naija News gathered that the thugs armed with cutlasses invaded the protest venue at Berger junction about an hour after the #EndSARS protesters had convened.

They harassed the protesters, including passers-by, destroying vehicles parked in the area.

An unconfirmed number of the protesters sustained injuries with five cars reportedly destroyed.

The ‘sponsored’ touts are right at Berger Abuja doing exactly what they were paid to do, destroying properties & attacking #EndSARS protesters.

Why are they afraid nah… #EndSWAT pic.twitter.com/faDJeiyCje

Recall that Nigerians have taken to the streets to protest extrajudicial killings and brutality by the now-disbanded Special Anti-Robbery Squad (SARS).

He also ordered former operatives of the disbanded SARS to submit themselves for psychological and medical examination at the Force HQ.

Unsatisfied with the IGP’s actions so far Nigerians on social media began another advocacy using #EndSWAT as a replacement for #EndSARS which was the number one trend globally for more than 48 hours.

Nigerian youths vowed to continue with protests in Lagos and Abuja.

#EndSARS: If Anybody Collects Money Drag The Person Out – Aisha Tells Protesters