Skip to content
You are here: Home » NEWS » Teacher flogs student to death in Delta State 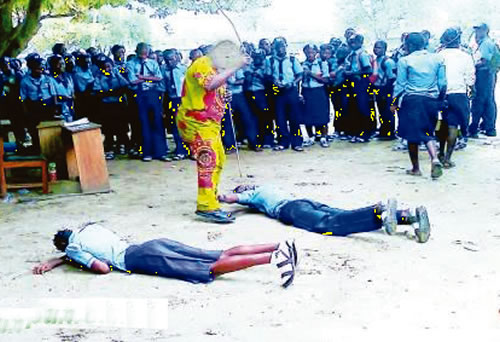 There was chaos in a secondary school in Delta state after a teacher reportedly flogged a student to death.

A student identified as Kelvin Ogheneogaga of Ekiugbo Grammar School, Ughelli North Local Government Area of Delta State has died after he was allegedly flogged by a teacher.

Reports reaching 1st News revealed that the demise instigated pandemonium in the community on Wednesday, February 26. After the teacher flogged the young lad to death; the furious students in the school premises also decided to vent their anger.

They destroyed some of the school’s property as well as pelted a vehicle with stones.

Sources disclosed that the students had earlier informed the teacher that Kelvin was not feeling well on account of a leg injury adding that the teacher continued beating the student, nevertheless.

The arrival of police did not calm the situation as the students continued in their protest; and also pelting them with stones.

But a senior police officer attached to Ughelli Area Command told newsmen that “There was a protest by students of Ekiugbo Grammar School, Ekiugbo, in Ughelli over the death of one Kelvin Ogheneogaga, who was said to have been flogged to death by a teacher.

”The teacher had on February 26, 2020, flogged the student for misconduct; after which it was reported that the student on getting home developed complications; and was rushed to Ughelli Central Hospital by his family where he died.

“When the news of his death got to the school, it led to a protest by the students who destroyed the school’s vehicles belonging to the principal and teachers,” he added.