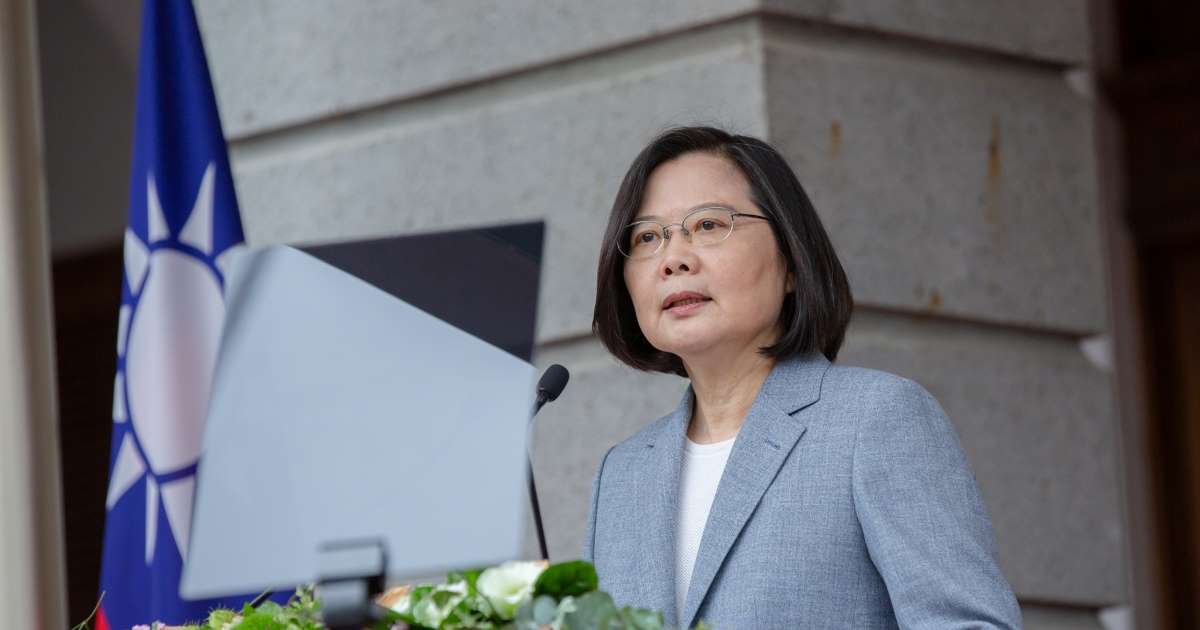 Taiwan will not accept attempts by China to “downgrade” its status, its president has said in an inauguration speech that

celebrated the island’s successful fight against the coronavirus and pledged to stand up to pressure from Beijing.

a vocal rebuke of Beijing’s ongoing campaign to isolate the island.

Tsai, who was sworn in on Wednesday, said both sides must find a way to coexist and called for stabilising relations with China,

which claims Taiwan as its own and vows it will be brought under control by force if necessary.

“We have resisted the pressure of aggression and annexation, we have made the transition from authoritarianism to democracy,” Tsai said.

“Although we were once isolated in the world, we have always persisted in values of democracy

and freedom no matter the challenges ahead of us.”

“We will not accept the Beijing authorities’ use of ‘one country,

two systems’ to downgrade Taiwan and undermine the cross-strait status quo,” she said,

referring to the framework under which the troubled region of Hong Kong is governed by Beijing.

“We stand fast by this principle.”

The comments drew a swift response from Beijing, which said China would never leave any room for “Taiwan independence”.

and after an international campaign to restore Taiwan’s status as an observer to the World Health Assembly (WHA),

which Beijing has blocked since 2016.

with “deep regret and strong dissatisfaction”, that they would put their bid on ice for now.

Beijing is facing growing international criticism over the virus,

Meanwhile, Taiwan’s global standing has been boosted by its response to the coronavirus pandemic,

which has been praised as effective without encroaching on the civil liberties of its citizens.

Taiwan responded quickly to the outbreak, monitoring and screening incoming travellers from as early as 31 December,

It also banned the export of face masks to ensure domestic supply.

After testing nearly 70,000 people, it has confirmed just 440 cases of the virus, of which seven were fatal.

There have been no new confirmed cases in almost three weeks.

Recent months have seen an apparent uptick in provocative action by Chinese forces in the seas separating the two regions,

including sending military flotillas and flybys towards Taiwan, and some calls for “reunification by force” from Beijing.

While analysts believe an invasion is not likely, Chinese state media has been quick to point out China’s military might.

“What ultimately determines the direction of the situation across the Taiwan Strait is a contest of strength,”

said an editorial from the state-run Global Times, published immediately after Tsai’s speech.

Tsai had called on Chinese leader Xi Jinping to help “prevent the intensification of antagonism and differences.”

and work with us to jointly stabilise the long term development of cross strait relations.”

Just hours after Tsai’s speech, China’s Taiwan Affairs Office said Beijing would continue “to work together with people from both sides to deepen development”,

but that it would never tolerate any act separating Taiwan from China,

or leave any room for any forms of independence.

and they would not tolerate the interference of “external forces” in Taiwan affairs, the official Xinhua news agency reported.

Tsai’s speech had also pledged growth and reform in Taiwan.

including a pledge to develop a cyber security industry which integrated with the global 5G transformation.

China’s Huawei technology company has come up against resistance and outright bans from some countries’ 5G networks because of security concerns.

“We will strive to create a cybersecurity system and industrial chain which can protect our country and earn the world’s trust,” she said.

Tsai noted the amount of attention Taiwan had received over recent months,

and thanked citizens for their efforts in responding to the outbreak.

She said the island’s work during the pandemic had “changed the way the international community views Taiwan”, which presented both opportunities and challenges.

“You have shown the world Taiwan’s commitment to civic virtues, even in times of greatest distress …

This is is what solidarity feels like,” she said. “It takes more than fervour to govern a country.”

Prior to her speech US secretary of state, Mike Pompeo, said Tsai’s “courage and vision in leading Taiwan’s vibrant democracy is an inspiration to the region and the world.”

Pompeo’s remarks, which were read out at Tsai’s ceremony,

are the first to be delivered to a Taiwanese president by a US secretary of state, according to Taiwan’s foreign ministry.

The inauguration including dozens of well-wishes from foreign dignitaries and former leaders and politicians.

The former US vice-president, Joe Biden, who is hoping to challenge Donald Trump for the presidency, sent his congratulations to Tsai.

“Taiwan’s thriving democracy and response to Covid-19 are an example to the world.

America’s support for Taiwan must remain strong, principled, and bipartisan.”

“The US and Taiwan want to play petty tricks at a low cost, which is too naive.

We will make them feel pain in some places that they can’t think of,” it said in a tweet.

“Washington and the Tsai administration are so narcissistic that they think they can make the mainland uncomfortable and have nothing to do by saying a few words,” it said.

“What ultimately determines the direction of the situation across the Taiwan Strait is a contest of strength.

The mainland’s military strength has been able to effectively overwhelm the Taiwan military and deter the US military.

The economic power between the two sides of the Taiwan Strait is tilted toward the mainland.

This is the broad outline of the situation across the Taiwan Strait.”