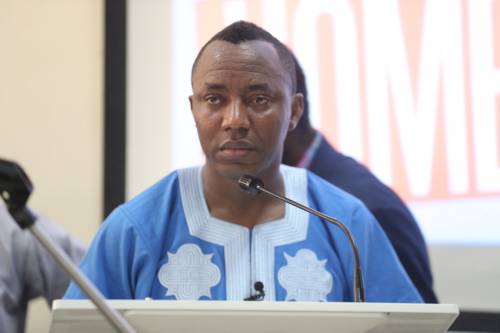 The Department of State Services (DSS) finally succumbed to a court mandate; after the release of the convener of #RevolutionNow, Omoyele Sowore.

Sowore was released on Thursday, December 5; after Justice Ijeoma Ojukwu of the Federal High Court, Abuja ordered the service to release him within 24hours.

According to Justice Ijeoma Ojukwu; the DSS had no justifiable reason to continue to hold the defendant in custody after she had signed the warrant for his release.

Justice Ojukwu, who gave the order; also awarded a N100,000 fine against the DSS. This is over its delay to serve the defence counsel with the additional proof of evidence; in the ongoing trial of Sowore and Olawale Bakare.

The judge, who was visibly angry over the development which has caused the court to adjourned the trial at the instance of the DSS; said the fine must be paid to the defendants before the next adjourned date.

However, Sowore is expected to appear in court on Friday for the commencement of trial.

Sowore, who has been in detention since August 3; has also demanded N500m for damages accumulated due to his detention.

He and Olawale Bakare, his co-accused, are standing trial on seven counts of treasonable felony, fraud, cyber-stalking and of insulting the president.