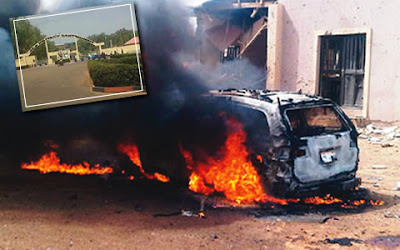 Military authorities on Sunday barred rescue agency officials and journalists from entering the Armed Forces Command and Staff College, where twin bomb blasts killed and injured scores of worshippers in Jaji near Kaduna.

The rescue officials from the National Emergency Management Agency and the Kaduna State Emergency Management Agency, on hearing of the blasts had raced to the college but were not allowed to enter by stern-looking soldiers .
Two car bombers had struck at the St. Andrew Military Protestant Church in the college which houses the officers and men of the Infantry Centre and School, the Nigerian Army Peace Keeping Centre as well as the prestigious Armed Forces Command Staff College.

An official of the State Emergency Agency, who did not want his name in print, confirmed that NEMA and SEMA officials were sent back from the barracks.

Even the police authorities could not provide information on the blasts. The Commissioner, state Police Command, Mr Femi Adenaike, when contacted, had referred journalists to the military authorities, whom he said were in a better position to give details of the incident
Army Director of Public Relations, Brig.-Gen. Bola Koleoso, put the number of the dead at 11 and injured at 30, but witnesses claimed the casualties were far more.

One of the eyewitnesses, who did not give his name, said, “Many people were killed. I saw many dead bodies. I think the people that died may be in the region of 40 or 50. Even some of those who were injured, I am not very sure they will survive it.”

The incident occurred less than a month after the St. Ritas’ Catholic Church, Ungwan Yero, Malali was bombed and barely 48 hours after the Federal Government offered cash rewards for information that could lead to the arrest of the leaders of the Islamic fundamentalist group, Boko Haram.

Another source at the prestigious military institution said the first blast occurred at about 12:15pm when the church service was over and the congregation had dispersed, leaving only the elders of the church who were holding meetings.

He claimed that the bombers arrived in the college where the nation’s anti-terrorists squad is trained in a Volkwagen Golf 3 and a Toyota Camry.

Our correspondents was told that just as worshipers surged to see the wreckage of the car, the second bomber arrived and detonated his bomb which killed several people.

Bombers beat military security
A military source also told one of our correspondents that in spite of the heavy security at the main gate of the college, the first bomber beat the military personnel and on getting to the church , parked his car beside one of the windows where the choir stand was before detonating his bomb.
The second explosion happened shortly after at about 12.35 in the church “where many bodies were seen on the ground.”

“The incident happened directly opposite the Directing Staff (Brigadier Quarters). A senior officer was believed to be among the dead,” the military source added.
Those injured in the attack were said to have been taken to the 44 Army Reference Hospital, the Nigerian Air Force Base Hospital in Kaduna and the Ahmadu Bello Teaching Hospital, Zaria for treatment.

Army reacts
But Koleoso, who in a statement on Sunday, said that investigations into the blasts had begun, added that a bus and not a Golf 3 was the first vehicle that was used in the attacks.
He said, “There were twin suicide bombings today (Sunday) at St. Andrew Military Protestant Church, Jaji Military Cantonment at 1205hrs.

“A bus first ran into the church and exploded about five minutes after service while a Toyota Camry parked outside the church detonated 10 minutes later.

“Figures of casualties were 11 dead and about 30 injured. The injured are receiving treatment at military hospitals both in Jaji and Kaduna.

“Investigations into the bombings have commenced and the area has already been condoned off.”
The AFCSC’s Public Relation Officer, Lt. Col Mohammed Dole, also told reporters that 11 people, mostly worshipers and commercial bike riders doing business in the cantonment died. He added that eight vehicles and many motorcycles were destroyed.

Yakowa, CAN condemn attacks
Meanwhile, Kaduna State Governor, Patrick Yakowa and the Christian Association of Nigeria, said they were deeply saddened by the incident.
Speaking through his Senior Special Assistant on Media, Mr. Reuben Buhari,Yakowa said, “It is with deep sadness that we sympathise with the family of those affected in the unfortunate incident.
“No matter what happened, we are convinced that evil will never triumph over good forever and as such, we call on all to continue to cooperate with the government and all security agencies to prevent incidents like this; and we pray that quick healing will come over those injured.”

CAN which described the attacks as “madness,” added that it was regrettable that no one was “helping us(Christians) out of this situation.”

Its General Secretary, Dr. Musa Asake, said “All we can say is that this is very unfortunate and it is becoming a mockery of the efforts of the leadership of this country to stop the attacks. It is mockery because it not long that these people said they were going for dialogue by selecting the people that they were going into dialogue with.

“What is happening now is unfortunate. These are people who have senses and reasoning. Therefore, there is no reason why worshippers of Almighty God should be killed. So one is getting confused as to how to respond to this kind of mockery, stupidity and madness, which is being perpetrated by people we claim that we don’t know.

“I believe that somewhere and somehow in the leadership of this country, somebody knows those that are behind these people. How long is it going to take us to really name them? Are they sacred cows? Are they worth the lives that are being killed? I don’t understand; what else do I say. We speak over and over, nothing changes. So, what do I say? I am at a loss and in tears over these happenings.”

Worshippers died in service to Nigeria
The Northern States Governors Forum described the attacks as “cruel and wicked.”
Commiserating with the military, Chairman of the forum and Governor of Niger State, Alhaji Mu’azu Babangida Aliyu, said, “the deceased were heroes who died in the course of service to our father land.

He further noted in a statement that “the reported death of officers, men and members of their families is a great national loss.”

Attacks, blow to dialogue
Also, a retired Commissioner of Police, Alhaji Abubakar Tsav, condemned the bombings in Jaji.
He said the act did not advance calls for dialogue between the Federal Government and Boko Haram.
He also said the bounty placed on leaders of the sect is also “aggravating the situation.”
Tsav said this in a telephone interview with one of our correspondents in Abuja, on Sunday.
Noting that no group had claimed responsibility for the Jaji attacks, he said the act was a big blow to attempts to find a solution to the insurgency through dialogue.

Tsav said, “If they are talking about dialogue and these bombings continue, it means that they are not serious. It could also mean that there is a military connection to this.
“If you look at the killing of Shuwa, the murderers passed through checkpoints and shot him several times without a response from the militarymen guarding his house.”

The retired police chief expressed grief that those who were in leadership positions today appeared to be more concerned about money and their personal positions than anything else.
He said, “Unless we lay less emphasis to money and position, we will not go anywhere. A lot of those in government today are not loyal; they are only interested in money. See how much money they spend on marriage ceremonies and other social functions.

“Those who have bright ideas are shielded from reaching the right quarters.
“I dare say, there is a military connection to this. If they (extremists) could go and bomb a church inside a military formation in Jaji, where can’t they go to? Where?”
Calling on all Nigerians of goodwill to help expose them, Tsav challenged the security agencies and the legal system to put Nigeria’s interest, stability, peace and progress above everything else.

Killings in Kano, Borno
Just as news of the Kaduna blasts spread, gunmen riding on motorbikes waylaid a Christian family on their way to church in Kano, killing the father, mother and their young son at the corner of Masalaci in the Unguwar-Gano Yar’akwa area on the outskirts of the city.

According to an online news portal, Sahara Reporters, the couple and their son were shot around 8.15am on Sunday while driving to church in a Volkswagen Golf in an area known to be the hotbed of the Boko Haram insurgent group.
In Sokoto, bandits on Sunday morning attacked a divisional police station in Isa Local Government Area.

An eyewitness said he saw them moving toward the station firing ceaselessly.
There was no confirmation of retaliation by the police or casualty as at the time of filing this report.
Tragedy also struck in Borno State on Saturday when suspected members of the Boko Haram in two separate incidents killed a district head and an influential businessman.

Mallam Zanna Mulima, the District Head of Gudumbali, was killed at his family house in Lawan Bukar Ward in Maiduguri shortly after the three days prayers’ of his brother who had also been killed by gunmen.
Also, Alhaji Dala Bama, a prosperous businessman, was killed in his hometown of Bama.

Obi Will Get The Backing Of A National Assembly That Has Majority Of Opposition Members, Ireti Says