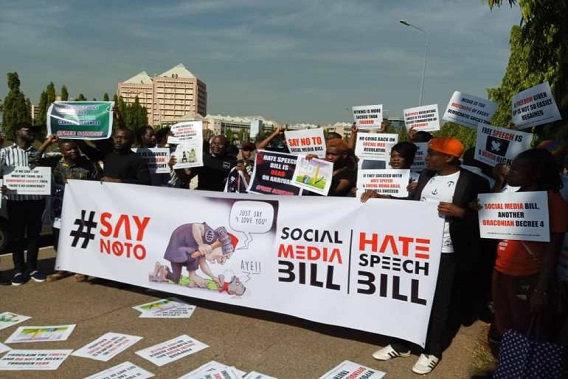 The backlash against Social Media bill continues on Monday, March 9; as several members of Civil Society Organizations (CSO) called for the trashing of the bill.

The Senate Committee on Judiciary, Human Rights and Legal Matters is currently conducting a public hearing at the National Assembly on the bill.

Speaking at the public hearing, Omeyele Sowere said that the bill will not protect Nigerians, rather the elite.

“It is because this bill was plagiarised from Singapore. The Nigerian Government is the biggest purveyors of fake news,” he said.

Sowere also called for the change of the 1999 constitution.

“Let us not point Government to the 1999 constitution. The constitution is outdated if we have a constitution that is for the people, this bill will never have been considered. This Social Media bill is dead.”

Also speaking against the bill, the Executive Director of YIAGA, Samson Itodo called for the trashing of the Social Media bill, argued that it infringes on human rights.

“The 9th Assembly should halt the bill from further consideration. It contravenes provisions for international instruments. Any attempt to regulate will infringe on the rights of young women.

It is worth noting that the Nigeria Communications Commission (NCC) also faulted some provisions in the bill.

The Executive Vice Chairman of the telecommunications regulator, Prof Umar Dambatta said that the bill contains for clauses that put too much power at the discretion of the police.

“Certain provisions could be used to infringe the rights of people. It gives too much power to the Nigerian police to the extent of being the judge. Some provisions of the bill are already covered.

“It has general drafting anomalies. To the national assembly, there may be a complete redraft of the bill.”

Earlier, the sponsor of the bill, Sani Musa said that he did not consult anyone before sponsoring the bill.

“I am aware of Section 39(1) of the Constitution on the freedom of expression. The bill is not a breach of fundamental human rights. It is in my interest to see it enacted. If this bill is acceptable to Nigeria, so be it. If it is not, I will continue to push on other grounds.

“When I conceived this bill, I did not consult with anybody. Nobody is going to deny the use of social media. You continue to post what is reasonable but with a line. Nobody is saying you should not seek redress or criticise the Government.”