Skip to content
You are here: Home » NEWS » Shekau: US announces $7m for information regarding Boko Haram leader’s whereabouts 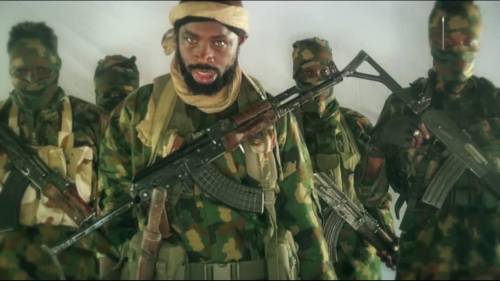 The United States Department of State is offering a reward of up to $7 million (N2.5billion); for information that would lead to the arrest of Boko Haram leader, Abubakar Shekau.

Shekau said to have been killed a number of times by Nigerian troops, is ranked number 8 on the wanted list of the US government; which also features other key leaders of several terrorist organisations.

This information was disclosed on Tuesday, March 3, by the Rewards for Justice Program; a counter-terrorism rewards program of the US Department of State’s Diplomatic Security Service, via its Twitter official handle.

“The United States Department of State offers a reward up to $7m for information; leading to the arrest of the terrorist, Abubakar Shekau, leader of Boko Haram,” the tweet read.

Shekau is currently the leader of Boko Haram; a Nigeria based extremist group seeking to overthrow the Nigerian government and establish territories governed based on a strict interpretation of Islamic law.

He assumed the leadership position of the group in July 2010; after the extrajudicial killing of its former leader, Mohammed Yusuf.

According to the Global Terrorism Index; Boko Haram has killed tens of thousands and displaced 2.3 million from their homes.

It was reported that at least 250,000 have left Nigeria and fled into Cameroon, Chad or Niger; which led to being branded as one of the world’s deadliest terror groups.

Their past targets include a vehicle bomb attack on the United Nations headquarters in Abuja in August 2011 marking the group’s first deadly operation against Western interests; killing at least 23 people and injuring 80 others.

In April 2012, the group bombed a Nigerian newspaper office in Abuja and later threatened other local and international news outlets.

The group has also carried out mass abductions including the kidnapping of 276 schoolgirls from Chibok in April 2014 and two years ago, abducted some schoolgirls from Dapchi in Yobe State; releasing all of them except Leah Sharibu who refused to deny her Christian faith.

As part of measures to win the war against terrorism; the Federal Government of Nigeria has initiated a plan to give amnesty to repentant terrorists; while the Senate is currently debating a bill to establish an agency that will cater to the repentant insurgents.

The government has claimed to have killed Shekau; but the Boko Haram leader has resurfaced on several videos to show that he is still alive.