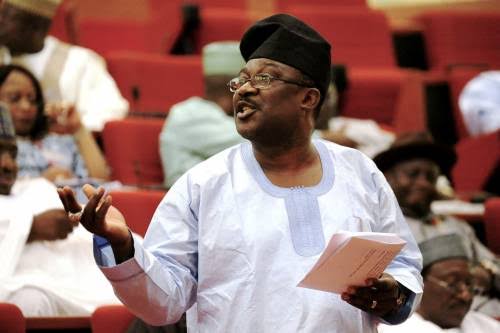 Senator Smart Adeyemi representing Kogi West Senatorial District on Wednesday, March 4; argued that the system of democracy being practiced in Nigeria currently has been criminalized.

Smart Adeyemi stated this while making contributions to “a bill for an Act to establish the National Electoral Offences Commission and for Other Related Matters.”

The lawmaker gave examples of how hooliganism is now evident within the political landscape.

According to his statement, the situation has painted Nigeria’s democracy in a bad light; to the extent that people look at all politicians as criminals.

Smart Adeyemi while addressing Senate President, Ahmed Lawan said: ”Mr. President, when people of questionable characters become leaders; then what is the future of that country. In fact, I am compelled to say, military era is better than Nigeria’s democracy currently.

“When you talk about maladministration and misappropriation of public funds; it emanates from people who have criminal records, people who have no background were elected or forced themselves into power.

“Mr. President, this is one of the best bills that we must all support.

“We are living witnesses to bad governance and bad representation in parliament. We must support this bill to bring good people into power, not charlatans, not ragamuffin.

Reacting to the statement, Senate President, Ahmad Lawan said the military era was not preferable to democracy as posited by Senator Smart Adeyemi.

He said that the Kogi lawmaker was entitled to his opinion; saying that he made the comment in his personal capacity.

“The position of this chambers is that democracy is better than military era; and Senator Adeyemi is entitled to his opinion”, Senate President noted.

Also reacting to the position of Adeyemi, Senator James Manager, (PDP, Delta South) who tried to come through a point of Order, said, “It is a popular Point Order. We can go ahead, but some of the submissions by our colleague, Senator Adeyemi are personal to him.

“So we don’t have to worry so much; but some of the issues he raised are not popular inside this chamber; and I think he is entitled to his opinion.”
Also in his response, Senator Bassey Akpan, (PDP, Akwa Ibom North-East) said, “It was unfortunate that the 2019 election was conducted with the 2010 Electoral Act as amended.

“How I wish we inject some innovation; based on the experience we had in 2015 with the amendment to the Electoral Act in 2019 before the general election

“I should believe that democracy still remains the most susceptible form of Governance. We are all products of elections; whether fair or bad elections still remain that there must be a loser and a winner.

On his point, Senator George Seikibo, (PDP, Rivers East) said, “First of all we have to forgive ourselves and forgive Nigerians. We would not say that democracy is not good that the military is better.

“That is not true. We are to make it good that is why we are here. It is not democracy when you highjack ballot boxes even when you are caught, you are not punished.”

Smart Adeyemi
Prev post ICPC to commence investigation into FIRS, others
Next Post Reps probe CBN, others over forex racketeering