Skip to content
You are here: Home » NEWS » Senate advocates set up of military base in Sambisa forest

Senate advocates set up of military base in Sambisa forest 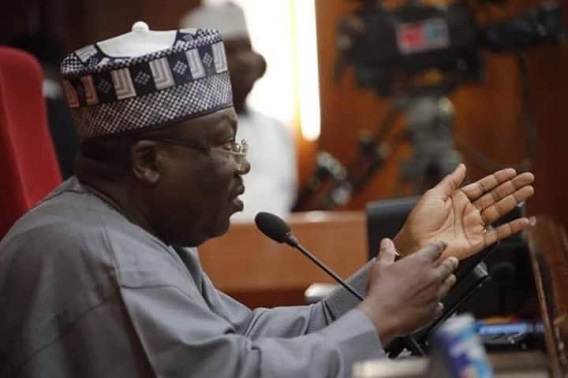 The President of the Nigerian Senate, Ahmed Lawan, on Tuesday, February 26; said the Senate will not rest until insecurity challenges in the country are tackled.

The Senate President stated this at plenary during the debate on a motion; raised by Senator Aishatu Ahmed (Adamawa Central) on the attack on Garkida town, Adamawa State last weekend by Boko Haram insurgents.

During the debate, the lawmakers resolved to re-establish a military base at the borders of Sambisa forest; to help checkmate the activities of the insurgents.

They further urged the National Emergency Management Agency (NEMA) to; “urgently assess the extent of damage; and provide relief materials immediately to the Garkida community affected.”

Lawan in his contribution said the Senate Ad hoc Committee on Security Architecture would submit its report for deliberations next week.

He also said: “The Senate has discussed and debated much about insecurity in the country; we set up an Ad hoc committee under the Senate Leader.

“The committee is working very hard. We are trying to look for solutions to the insecurity bedeviling the country.

“We are not going to rest on our oars; until we are able to provide solutions to the insecurity in the country.

“This is the essence of our being in government and of course; it would require that we work with the House of Representatives, the Executive as well as citizens.

“I believe that citizens need to be taken into confidence in the fight against insecurity.

“We will not waste any time. As soon as the report is ready, I believe it will be by next week. We will look at it and take valuable resolutions; and of course, engage the Executive arm of government.”

In her lead debate, Senator Ahmed said the Garkida attack had “religious connotation.”

She also disclosed that she had information; that three soldiers were killed in the attack; calling on the Federal Government to take more drastic action against the insurgents.

She said: “I am aware that three soldiers were killed in the dastardly attack.

“I am worried that the Garkida crisis; which has led to the destruction of lives and property; was planned by the insurgents to have a religious connotation.

“This is considering that churches and residences of some prominent indigenes were burnt; an act aimed at destroying the foundation of peaceful co-existence among Garkida community; and Adamawa State as a whole.”