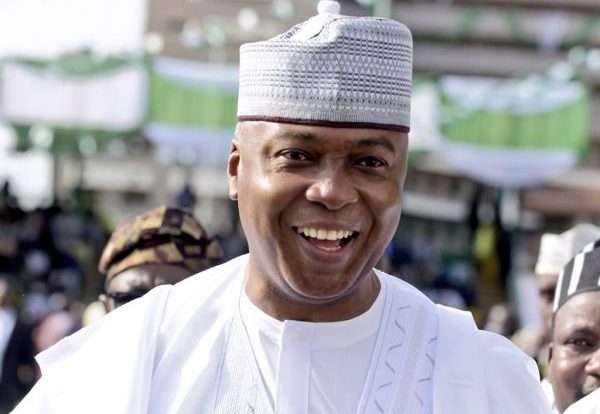 Former Senate President, Bukola Saraki, on Tuesday, January 21; appealed to the Federal High Court in Lagos State to dismiss a suit filed by the Economic and Financial Crimes Commission (EFCC); praying for the permanent forfeiture of his Ilorin houses.

Saraki described the suit as an abuse of court processes; as well as a move to scandalise him.

The former Kwara state governor further explained that it is part of a scheme by the EFCC; to review the July 6, 2018 decision of the Supreme Court “discharging the applicant from culpability; arising from the same money and houses which are the subject matter of this action”.

The EFCC had, in the suit filed before Justice Rilwan Aikawa, claimed that the houses – Plots No. 10 and No. 11 Abdulkadir Road, GRA, Ilorin, Kwara State; were acquired with proceeds of unlawful activities allegedly perpetrated by Saraki; while he was Kwara State Governor between 2003 and 2011.

Justice Aikawa had on December 2, 2019; ordered the temporary forfeiture of the houses to the Federal Government.

The judge adjourned for Saraki to appear before him to give reasons; why the houses should not be permanently forfeited to the Federal Government.

In response, Saraki, through his lawyer, Kehinde Ogunwumiju filed a preliminary objection; challenging the territorial jurisdiction of the court to entertain the suit.

The ex-Kwara State governor said the new EFCC’s suit was meant to “irritate, annoy and scandalise” him; and also urged Justice Aikawa to dismiss it.

The judge, on Tuesday, adjourned till February 5; to take arguments on Saraki’s objection.

The EFCC, in the suit, told the court that it received “a damning intelligence report; showing monumental fraud perpetrated in the treasury of the Kwara State Government; between 2003 and 2011;” when Saraki was the governor of the state.

Amotekun is a Christian agenda to silence us – Osun Muslims