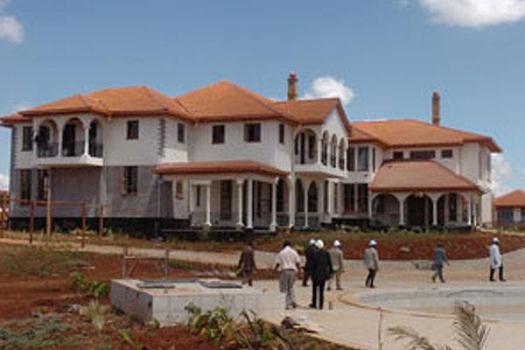 President Goodluck Jonathan has stepped into the row sparked by the N9billion variation on the contract sum for the new official residence of Vice President Namadi Sambo.

The project was originally planned to cost N7billion.

A request for the approval of the National Assembly for an additional N9billion for the purpose of providing furniture, fence, two protocol guest houses, a banquet hall and security gadgets has provoked outrage across the country.

President Jonathan is said to be dismayed by the controversy trailing the request and asked to be briefed by Vice President Sambo on the issue.

The Senate Committee on Federal Capital Territory has already written to Julius Berger Nigeria Limited, which is constructing the mansion, to justify the increase in contract sum.
During an inspection visit to the site by the Senate Committee, the Executive Secretary of the Federal Capital Development Authority (FCDA), Adamu Ismail had said the project was awarded in 2009 at the cost of N7billion.

He said the additional N9 billion was required to provide furniture, fencing, two additional protocol guest houses, a banquet hall and other security gadgets.
Ismail said the new proposal was not included in the original scope of work being handled by Julius Berger.

The Senate Committee is insisting on investigating the reasons advanced for the variation of the contract sum.

A reliable source familiar with the matter said the Executive arm was studying the observations of the Senate Committee.

He said the President had received brief from the Vice-President and relevant officials in the Ministry of Federal Capital Territory and the FCDA on the contract.

It was gathered that the Vice-President felt personally touched that his hard-earned image was dragged into the project which is to house him and his successors.

Another source added: “The VP was uncomfortable with the position of the Senate Committee on the residential building and the backlash. He has made his opinion known to the President.
“The President is however getting brief from all sides connected with the project on the increase in the contract sum.

“As a matter of fact, a top government official met informally with the Chairman of the Senate Committee on FCT, Senator Smart Adeyemi, to verify facts and figures on the project. The meeting with Adeyemi took about one and a half hours.

“The Executive has not taken any decision on whether to review the contract upward or retain the original cost. The ongoing briefing by all parties involved in the contract would determine the position of the Executive.”

“Once we have got a response from the construction company, we will ask other experts to analyze its submission.

“We want to be as transparent as possible to ensure that we are acting only in the public interest.”
Meanwhile, the Chairman of the Senate Committee, Senator Smart Adeyemi, who spoke with our correspondent last night, said: “The issues we raised about the contract do not amount to undermining the government in any form. We are also not out to embarrass public officers or any party whatsoever.
“As part of the transformation agenda of the government, we did our bit as Senators to expose why a project conceived at N7billion would attract additional N9billion. We acted in good faith and in the interest of the public.

“It is left to the Executive to look at the issues in question and take necessary steps on the future of the contract. This committee is not a trial court but we owe this nation a duty to ensure that it has value for money on any project.”

Concerning allegations that the committee has compromised due to pressure, Adeyemi added: “We have not compromised, we have not chickened out. We have made our position known and we are going further to collate facts and figures for the public to judge.

“After we have completed our assignment, it is left to Nigerians to judge.”
The Executive Secretary of the Federal Capital Development Authority (FCDA), Adamu Ismail had Ismail told the lawmakers that the proposed additional N9 billion has been slashed to about N6 billion by the Bureau for Public Procurement (BPP).

He said: “We have worked out the details and passed to BPP for consideration.
“They (BPP) have sent it back to us with their observation.
“We requested for N9 billion but now it came to about N6 billion.”
Adeyemi said either N13billion or N14 billion or N16billion for the project is indefensible in view of present realities.

Photos: Rihanna goes to the hood of Barbados