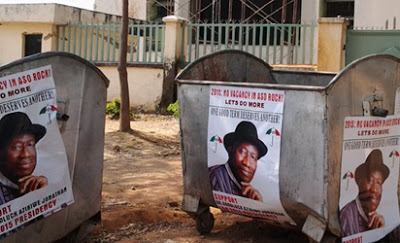 President Goodluck Jonathan today denied having a hand in the campaign posters that flooded the streets of Abuja yesterday January 1st, announcing his readiness to contest in the 2015 elections. His Special Adviser on Media and Publicity, Dr Reuben Abati said those behind the posters didn’t do it with the president’s permission.

‘Those pasting the posters are trying to express their own view. The president had stated that he will talk about the presidency from 2014. Those doing these do not have the consent of the president. What is most important now is for the president to deliver on his electioneering promise to Nigerians and not to embark on the pasting of posters. It has not come from the president. Nigerians should take the president for his word and ignore any other information to the contrary”

Do you believe them?

Last photo taken of Bisi Komolafe in hospital before her death