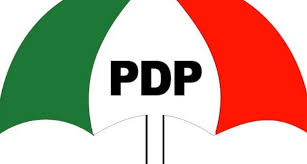 As part of measures to cushion the economic effect of the lockdown, the People’s Democratic Party (PDP) has called for the suspension of charges for use of ATM cards and low amount mobile fund transfers.
This move was disclosed by the party’s National Publicity Secretary, Mr Kola Ologbondiyan, on Sunday in Abuja.

“The PDP demands the CBN to immediately liaise with commercial banks and stimulate a special social sustenance modality to defray the cost of such charges, particularly to cover minimal transactions in favour of vulnerable Nigerians.
calls on the Federal Government to show compassion on suffering Nigerians whose means of subsistence have been crippled by the lockdown, and immediately provide funds to electricity distribution companies to actuate the tariff suspension within this period.”
The party also called on the presidency to extend economic relief to vulnerable and poor Nigerians residing in areas outside Lagos.

“Consequently, the PDP restates its call on President Muhammadu Buhari to immediately extend similar financial intervention that was released to Lagos state to all other states of the federation.”