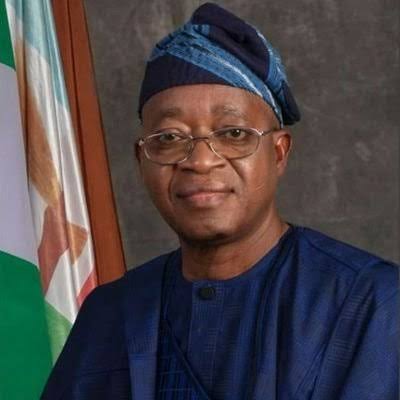 Osun State Governor, Gboyega Oyetola has given suspected hoodlums, who looted government and private property in the state, 72 hours within which to return them or face the wrath of the law.

The governor gave the order while addressing newsmen during an on-the-spot assessment of some of the looted sites.

Oyetola called on the hoodlums to surrender all the stolen items to the security agencies, traditional rulers, local government chairmen; as well as community leaders in their respective domains. However, he warned that those who refused to honour the ultimatum would be tracked and brought to justice; while those who embraced it would be forgiven.

The governor, while sympathising with the victims of the looted property, promised them government’s support.

Among the looted sites were warehouses, where COVID-19 palliatives were stored as well as a number of private stores. Also affected was the National Grain Silos in Ilesa as hoodlums looted all the food items kept in the facility.

The governor, who expressed worry over the development, further imposed a 24-hour curfew in Osun on Saturday.

Speaking at Tuns Farm, one of the private property looted, Oyetola commiserated with Chairman of the farm; Alhaji Tunde Badmus, over the death of his staff during the raid.

“What I witnessed here today is not actually a question of hoodlums, but armed robbers. They have actually removed all the machines that are here.

“It is very unfortunate. What I have seen here is massive looting, armed robbery and stealing of the highest order. I can say categorically that EndSARS protest is not what we are seeing here today. This is pure looting and it is all over.”

In his response, Badmus said that they had written formally to the police to report the murder and armed robbery that took place in the company.

He put the figure of what was lost to the looting at more than N100 million.

Speaking at Omoluabi garment factory, which was also looted; the Osun State governor said it was unfortunate that the looting occurred at a time when the government was attracting investors.

He described the incident as unfortunate, sad and a premeditated move to disrupt the peace of the state.

“As a government, we will look at the possible ways of bringing the victims back to life through our efforts and the intervention of the Federal Government,” the governor said.