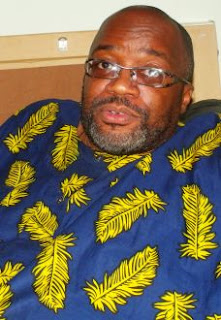 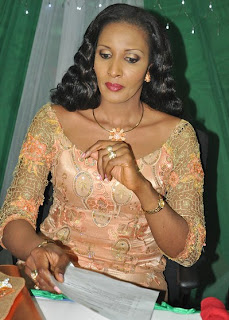 Emeka, first son of late Biafran leader Odumegwu-Ojukwu, Saturday alleged that the will presented by Barr. Onyekwelu on Friday is fraudulent, saying the lawyer is a private counsel to Ambassador Bianca Ojukwu and not that of his late father.

Ojukwu claimed he has a copy of the original will written by his father and not what he called the “fraud” presented to them as Ojukwu’s will.
Speaking at his country home in Nnewi, Anambra State, the late Igbo leader’s son maintained that his late father’s will was altered in favour of his step mother.
His words: “There have been rumours up to yesterday that there is an attempt to read the will and that they intend to make changes in the original will. Well, I have not seen the will that they read.
“Now there are issues that come to mind. Why were there no members of Ojukwu family when the will was read? They were not invited and they were not told.
“She was here last Sunday when we removed the mourning cloth and since she knows that the will would be read she would have invited us or even put us on notice.
“Now the lawyer that is supposedly doing all this things is not our father’s lawyer. Mr Onyekwelu is not a lawyer that is known to the family as Ezeigbo’s lawyer. Remember when Ezeigbo was sick the same lawyer went to the press to claim that Ezeigbo was recuperating and that was not true.
“It is still the same lawyer that claimed to have custody of the will. And I told everybody that it was not true and that since my father was flown to England he never lifted an arm or spoken a word until his death finally.
“How can the lawyer claim that he is Ezeigbo’s lawyer when he had already taken sides with Bianca and doing the woman’s biddings and why would the will be read in Enugu instead of in Anambra State? You can see all elements of suspicion in the matter.”
Ojukwu insisted that the family members have the original copy of Ojukwu’s will and know that what was read was a contradiction.
“We have the original copy of the will and we know where it is, even if you want to make some changes in the will it should be done before the beneficiaries and seeking their consent. Furthermore, when a will is amended without the presence of the people involved but only the presence of the person who would ultimately benefit  from the changes, then it is a fraud and a charade.”
Reacting to the willing of Ojukwu Transport Limited, Emeka explained that Bianca is currently in court with OTL where she used the names of her two sons to drag the company to court.
“The claim that my father transferred his trustee membership to Bianca is false. First of all, my father Ojukwu was not a trustee. His position in OTL is that of a director not trustee. The position of director cannot be transferred to anybody. Even if it is transferred to me it would not hold. There is a laid down law or procedure for one to become a director in the transport company.
“For you to be director in Ojukwu Transport you must have Ojukwu blood and not through marriage into Ojukwu family. You have to have at least 10 shares. And you have to be voted into directorship by the board of trustees and a woman cannot be a director. Also if you are a public servant you cannot be a director and even if Bianca is a director she has to resign because she is now a public servant by virtue of the fact that she is now an ambassador.
“There was a time my father has to resign as director and later he was reinstated as one when he stopped being a public servant .So there are many reasons why this claim is spurious.
“The person that is claiming that the directorship was bestowed on her is right now in court suing Ojukwu Transport in the name of her two sons. There is a lawsuit right now, and it is in the public domain, where she is using the names of her two sons to sue the company.”
Emeka also confirmed that the mysterious girl that benefited from the will is his father’s daughter, adding that his father Ojukwu had told him about the girl before now.
“My father had earlier told me about the girl in question and told me all that had happened before he died. So she is not a stranger and in the original will she was mentioned by my father.”
A night before the will was read, Ojukwu recalled that he was away to attend a funeral ceremony when his security guards at the gate phoned to report that the Anambra Commissioner for Commerce and Industry, Mr Robert Okonkwo had driven into the compound and carted away Bianca’s property from  Ojukwu’s main house. This, he noted, was a confirmation that Bianca had a premonition that the will would be read the following day and that Ojukwu’s main house would be willed to him as the first son.
Source: Thisday Live
Tags
Ojukwu’s

Pictures from A wish premiere

Some people are not normal sha! Lol....