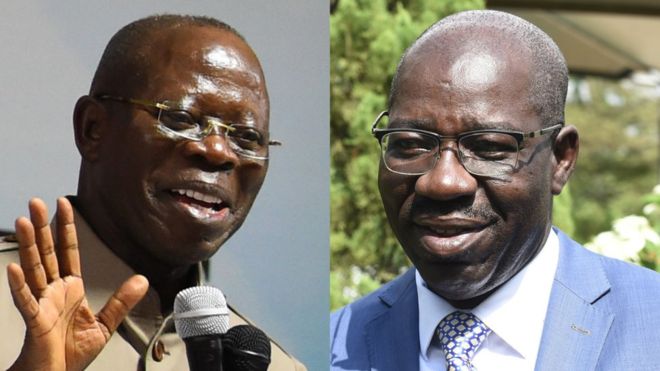 The Edo State Government on Monday, February 3; demanded the immediate arrest and prosecution of the National Chairman of the All Progressives Congress (APC), Adams Oshiomhole; accusing him of constantly creating security breaches in the state and holding rallies in defiance of orders.

The government said Oshiomhole has failed to obey lawful orders both by the state government; as well as the Inspector General of Police and had held rallies in different parts of the state.

As a matter of fact, the arrest mandate was confirmed by the deputy governor, Phillip Shuaibu.

Equally important, Shuaibu told newsmen in Abuja that Oshiomhole was not above the law. In addition, he stated that nobody disobeyed his (Oshiomhole) directives when he was governor.

While denying betraying Oshiomhole, Shuaibu said the former governor remained his father; while he is a son even though they are not on the same page politically at the moment.

He said: “I am in Abuja to meet with the Inspector General of Police. I have a petition to the Inspector General of Police and to the Director of Department of State Services; to the effect that Comrade Adams Oshiomhole be arrested by the Police and be arrested by the DSS for the break down of law and order that he has consistently perpetrated in Edo state.

Oshiomhole responsible for break down for law, order in Edo, says State Government

“For us, we have officially come now to drop our petition with the IG to the effect that Oshiomhole is not above the law. He should be arrested for violating the state government order.

“He was a governor before and he knows that nobody violated his orders as governor, because it is not about him, it is about the state. When everybody disobeys laws, then the country becomes a Banana Republic. God forbids.

“That is why we are saying that the IG and the DG of DSS should arrest him and interrogate him for breaching the peace and disobeying government orders and security orders for rallies.”

Shuaibu denied insinuations that he and Governor Obaseki were leaving the party, saying “that statement has been coming on and on. I can categorically tell you that the governor of Edo State; Godwin Obaseki and I are in APC and we are not leaving APC.

“The party is stronger today because of the governor of Edo state and when we read such things on the social media, what we just say is that this is another fake news. We are not leaving APC. APC is our party. We formed it and we are solidly on ground to promote good governance and the governor is doing very well.”