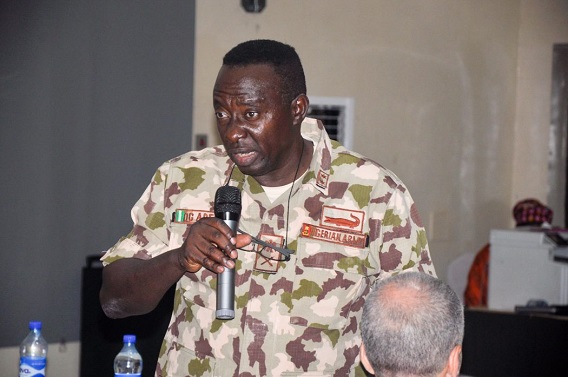 The Nigerian Army on Tuesday, March 31; announced that it had removed the army commander of its counter-terrorism operations in the country’s restive northeast.

A spokesman for the Nigerian Army, Sagir Musa said in a statement that Major General Olusegun Adeniyi was taken from command of the military operation and “redeployed” to an army research institute.

He said the move was approved by the Chief of Army Staff, Tukur Buratai as “a routine/normal exercise for greater professional effectiveness and efficiency.”

Adeniyi was replaced by an army division commander in the country’s northwest, Major General Faruk Yahaya.

Some senior military officers told the press on condition of anonymity that the removal of Adeniyi was fueled by the recent killing of 47 soldiers and officers.

This was in an ambush by Boko Haram terrorists in the country’s volatile northeast region on March 22.

Security expert Mike Ejiafor said the replacement could have been made for tactical reasons.

“It could be for tactical reasons, though the army didn’t say so,” he revealed from the capital Abuja.

Ejiafor also cited recent comments by Adeniyi decrying supplies and intelligence shortages in a video that went viral across the country.

He said the commander should not have revealed information about the logistics challenges troops were facing on the battlefield.

Boko Haram has claimed responsibility for most of the terror attacks in the country’s northeast region for over a decade.

Also, the Defence Headquarters says troops of Operation Lafiya Dole (OPLD) have eliminated another top Boko Haram commander; Abu Usamah in an encounter on March 22 at Gorgi in Borno.

Onyeuko said that the military communication confirmed by accurate intelligence that Abu Usamah was among Boko Haram insurgents killed during the encounter.

He explained that Usamah had earlier sustained fatal gunshot wounds in the firefight that ensued during the encounter; before his foot soldiers hurriedly evacuated him and withdrew.

“His death has no doubt created a consequential vacuum in the Boko Haram leadership; particularly as the gallant troops remain resilient and continue to rout the criminal elements from their last enclaves in the North East,” he said.