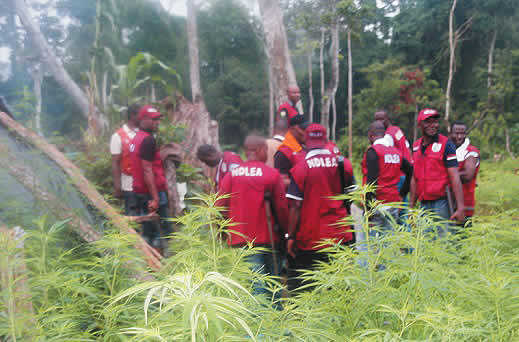 The Commander of the agency, Idris Bello, made the disclosure in an interview with the newsmen on Wednesday in Yola.

Bello disclosed that they arrested the suspects sequel to raids men of the command coordinated at Yola market, abbattoire and other parts of the state.

He said that the agency recovered 4.815 Kilogramme of illicit drugs from the suspects.

The commander noted that the special squad of the command following a tip off; carried out the raids on the abattoir and market.

“This brings the total seizures made from January 27 to date; to 21.59 Kilogramme of different illicit drugs.

“The command conducted raid at Yola abattoir which is one of the den of drugs dealers; arrested 10 suspects and seized a total of 4.815 Kilogramme of illicit drugs.

“Also in Yola town market, we arrested one suspect; and also six grams of suspected substances believed to be tramadol was seized,” he said.

Bello added that three other suspects were also arrested in possession of psychotropic substances at Numan and Fufore; while one other was arrested at Jimeta Central Motor Park with diazepam weighing 20 grams.

The commander said the suspects were being investigated;

and they would soon be arraigned in court.