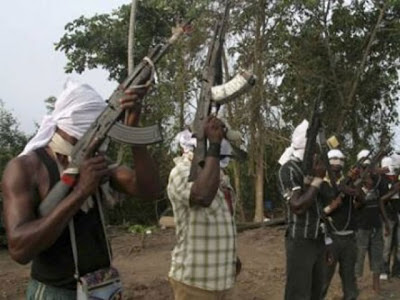 An unspecified number of people were reportedly killed.

The bombed banks were behind the Federal Polytechnic campus.

The PHCN office on Alhaji Musa Street was bombed. The police station was set on fire along with some vehicles.

A resident of the area where the PHCN office is located said the sheer force of the explosion brought down at least one gate and a fence in the neighbourhood. Several buildings lost louvres, windows and doors frames.

A resident living directly behind the PHCN office said: “We are under siege; they just bombed PHCN office; we heard the police station has been razed and we are afraid because there’s a filling station nearby and if they bomb it, we will be in a bigger danger.”

As at 8:35pm, our sources said the police engaged the invaders in a gun duel to prevent them from pushing ahead.

A resident, Mr. Williams Oriaghe, posted on twitter at about 6:27 pm: “Gunshot all over Auchi town.” He followed up with another tweet at 6:55pm: “Gunshot still raining here in Auchi.”
At 7pm, he said silence as of a grave yard had descended upon his part of the town.

Another said they were advised to stay indoors to avoid being hit by stray bullets.
It was gathered that the gunmen first attacked a police station with dynamites and explosives.
Some policemen were said to have died in the attack.

Another source added that a combined team of policemen and soldiers had cordoned off roads leading out of the community.

The source said the gunmen drove through villages, shooting sporadically.
The Acting State Commissioner of Police, Mohammed Hurdi, said he was on his way to Auchi and would issue a report later.

“I don’t want to lie about the incident. Call me later and I will brief you on the accurate information,” Hurdi said. But he could no longer be reached last night.