Skip to content
You are here: Home » NEWS » Lawan reveals discussions with Buhari during meeting, insecurity high on agenda 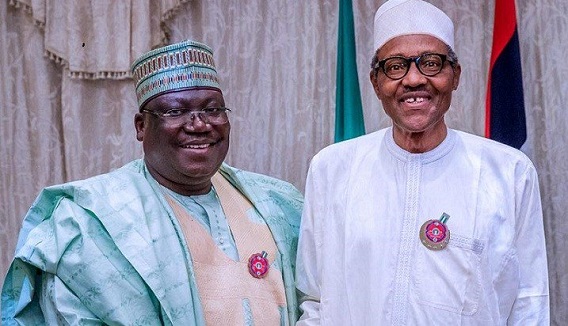 President Muhammadu Buhari and Senate President Ahmad Lawan on Monday, February 3; in Abuja discussed the state of insecurity in the country while brainstorming on the way forward.

Lawan made this confirmation during a meeting with the press; at the end of a closed-door meeting between the president and the leadership of the NASS.

He said the meeting discussed all issues of security including the performances of the security agencies; in addressing the menace of insurgency, banditry, and kidnapping in the country.

Lawan further revealed that the resolutions of the National Assembly on insecurity; part of which was that service chiefs should be asked to resign or sacked were discussed.

“We met with Mr. President over the security issues in the country and other matters of governance. The recent security challenge this country is facing requires that we work very closely.

“We had the debates in the two chambers of the National Assembly last week. Resolutions were taken and we have come to discuss with Mr. President on the way forward; what we feel about some of these security challenges and also to ask him what he thinks we should do.”

Lawan also stated that the meeting discussed the need to provide additional necessary equipment and welfare for the nation’s armed forces and the police. This is to enable them to operate and perform efficiently and effectively.

“Of course as the leader of this country, he is more worried than anybody else about the situation.

“So, we are on the same page that we should be able to do whatever it takes to ensure; that the security agencies are able to perform better than they are doing now,’’ he said.

On whether the removal of service chiefs from office would solve the nation’s security challenges; Lawan said, “You see, in matters of security of course as leaders we are supposed to lead; but when it concerns security every single citizen matters in this.

“So, it is for all of us, citizens and leaders to ensure that we are playing our part as it is necessary.”

Lawan also stressed the need to provide better welfare conditions for members of the security agencies; to enable them to deliver meaningful results in the fight against insurgency and crimes in the country.