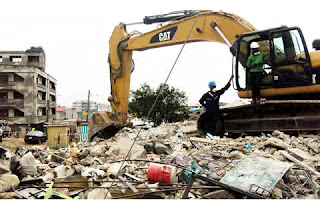 No fewer than 60 flats have been marked for demolition at the Jakande Low Cost Estate, Isolo, Lagos.

Sixty-eight-year-old widow, Adebisi Coker, lost her two daughters to a building collapse in the estate on November 21.

Immediately after the collapse, occupants in similar weak structures were given a 48-hour quit notice but they were still in the buildings when our correspondent visited the estate on Saturday.

The letter of notice sent to the occupants by the Enforcement Department, Oshodi/Isolo Zonal Office of the Lagos State Building Control Agency, read, “A distressed structure dangerous for human habitation.”

Ten blocks of six flats marked for demolition have been sealed off by the agency.

Some residents, who spoke to our correspondent, said more buildings might be marked for demolition after a structural evaluation by the agency billed for Wednesday.

One of them, who preferred to be anonymous, called on the government to relocate them, adding that the government built the structures and should be liable for the collapse.

The resident said, “The buildings were built in 2001. However, 11 years after, they are too weak and due for demolition. About 80 per cent of the buildings in Zone M34 of the estate have been marked.”

Efforts by our correspondents to know when the buildings would be demolished from the General Manager, Lagos State Emergency Management, Dr. Femi Oke-Osanyintolu, proved abortive as several calls to his mobile phone on Saturday were unanswered.

He also did not respond to the text message sent to him by our correspondent.