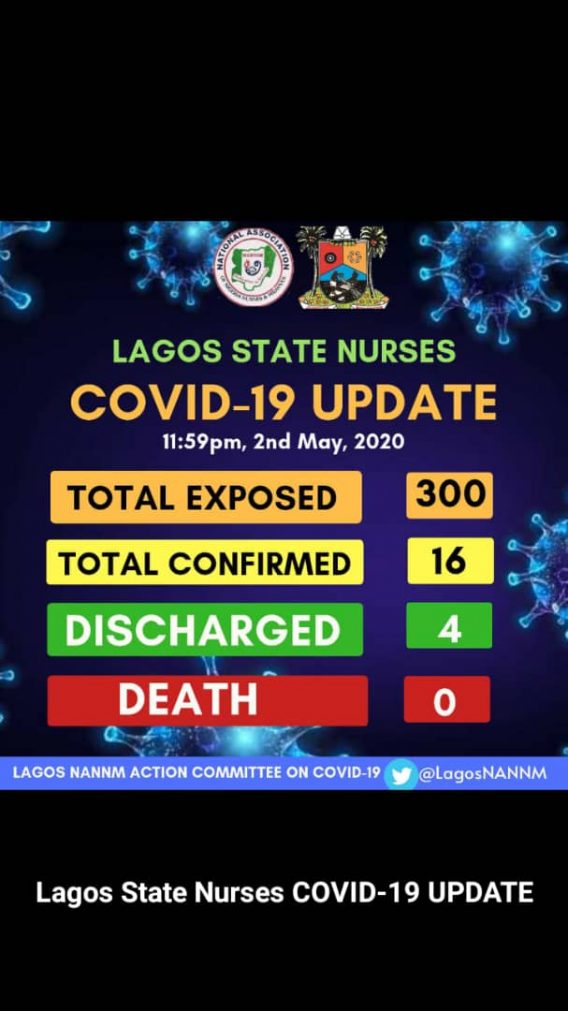 Lagos state has recorded 300 cases of nurses exposed to the COVID-19 during the medical care of infected patients.

This was disclosed on the social media portal of the microblogging website, Twitter, of the Lagos state nurses COVID-19 update, as at 11:59pm of 2nd May; in collaboration with the National Association of Nigeria Nurses and Midwives.

According to the update, “Nurses exposed to COVID-19 in Lagos state stand at 300, total confirmed – 16; while discharged patients stand at four and no death recorded.”

Reports that no fewer than 13 medical workers at the Randle General Hospital, Surulere; may have been exposed to a COVID-19 patient; who died at the medical facility.

On Sunday, a team from the Nigeria Centre for Disease Control, NCDC, would conduct tests for the virus for the workers; including doctors on Monday.

According to reports, the hospital admitted a 65-year-old woman, identified as Iyabo; last Sunday after she complained of difficulty in breathing. The petty trader, who also had diabetes, was said to have been treated; before some doctors insisted that she be tested for the coronavirus.

She was later taken to the Lagos University Teaching Hospital, Idi Araba; where she was rejected after medical personnel there allegedly claimed that she did not fit a COVID-19 case.

The woman, who was also hypertensive, was returned to Randle where she died.

Apprehensive workers at the hospital were informed on Friday that the result of the NCDC test confirmed that she was positive.

The Medical Director of the hospital, Dr Aduke Odutayo, who confirmed the case to newsmen; said the NCDC was on top of the situation.

The state Commissioner for Information, Mr Gbenga Omotosho; who also confirmed the report, said there was no cause for alarm.

Governor Babajide Sanwo-Olu, made the disclosure in a statement issued to newsmen; saying that the number of patients treated and discharged from the isolation centres now stands at 247.

”Good people of Lagos, today, 22 more persons; 8 females and 14 males; all Nigerians were discharged from our isolation facilities at Yaba, LUTH and Lekki to reunite with the society.

”The patients; 19 from Lagos University Teaching Hospital, two from the Mainland Infectious Disease Hospital, Yaba; and one from our Isolation Facility at Lekki were discharged having fully recovered; and tested negative to COVID-19 in two consecutive readings.

”This brings to 247 the number of COVID-19 confirmed cases that have been successfully managed; and discharged in Lagos.

”As we look forward to more great news in the coming days; I implore you all to support our offensive against the disease,” Sanwo-Olu said.