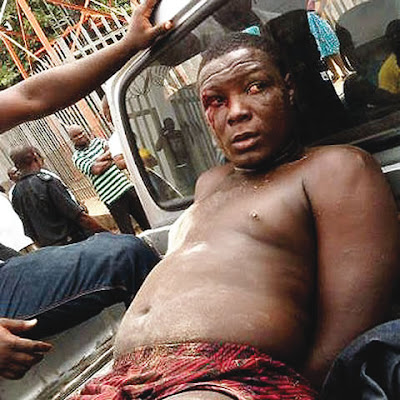 The Lagos State Police Command has apprehended Ibrahim Balogun, a 25-year-old man accused of perpetrating a series of murders in Somolu, Bariga and Fadeyi in the state.
PUNCH Metro had reported on June 25, 2012, that Balogun also known as Small Jpron, was declared wanted following a gang-related violence between Shaggy Boys and Downtown Boys which left at least five people dead in Ilaje, Bariga.
Balogun, who also goes by the pseudonym, Asarailu, which means death in Arabic, is said to be the deputy gang leader of Downtown Boys and a member of a sect, Eiye Confraternity also known as EFCC Boys.
PUNCH Metro learnt that Balogun was arrested on Bawahala Street near Pedro Police Station on Saturday.
A reliable police source narrated the circumstances that led to Balogun’s arrest to our correspondent.
He said, “On Friday, around 11:30am, Yusuf Adebowale, a resident of Somolu, took a commercial motorcycle to FirstBank branch in Fadeyi to withdraw N100, 000. As he was withdrawing the money from ATM, the okada rider, later identified as Dare, informed Balogun and his gang.
“As Adebowale left the bank, just a few metres away, Balogun and three other gang members attacked  him and stole the money, phone and a wristwatch.
“Adebowale reported the matter at Onipanu Police Station and also told youths in the area about his ordeal. Less than an hour later, Dare, the okada rider, was apprehended by residents and taken to the  police station where he confessed.
“Later that night, he led us to Balogun’s hideout but Balogun was not around. One of the policemen, identified as Abu, however released Dare without authorisation.”
Our correspondent learnt that the following day, around 11:30am, Balogun and four others allegedly went to rob residents of Bawahala Street and a woman alerted the police.
The police source said, “In broad daylight, Balogun and four gang members, heavily armed, went to rob. We received a distress call and policemen headed by Inspector Smart, rushed down to the scene.
“The four others escaped but Balogun was arrested and taken to Pedro Police Station where he identified himself as Ibrahim Oriyomi Folarin.”
Our correspondent learnt that the policemen could not identify Balogun even though the police had declared him wanted. However, scores of residents stormed the police station and quickly identified him.
It was learnt that there was pandemonium at the station as residents who had fallen victims to Balogun and his gang asked the police to hand him over.
Youths in the area were said to have brought a tyre and petrol which they threatened to set the suspect ablaze.
But the Special Anti-Robbery Squad took Balogun away and this restored normalcy to the station.
When contacted, the spokesperson for the state police command, Ngozi Braide, confirmed the incident to our correspondent on the telephone.
She said Balogun had been on police wanted list for a long time.
“I just spoke to the officer in charge of SARS and he confirmed the incident to me. He said the suspect (Balogun) is accused of murders, attempted murders and robberies,” she said.

Why Keshi will not take Obafemi Martins to the Nations Cup