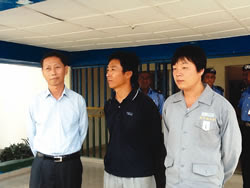 The four Koreans (pictured above) and a Nigerian kidnapped in Bayelsa State by eight gunmen said on Saturday that their assailants fed them with noodles, tea and banana while in captivity.

The victims, who were released on Friday night after spending five days in the kidnappers’ den located in a mangrove, said the captors set them free after branding them “bad market.”

Jong Ken, Hi Kim, Doo Lee, Joon Chae and a Nigerian, Austin Giwa, who are employees of the Hyundai Fabrication Company at Okpoama, Brass Local Government Area, were whisked away by gunmen who raided the firm on December 17.

“They told us that we were bad market and allowed us to go,” Giwa told PUNCH Metro.
Giwa, who spoke with our correspondent at the headquarters of the state police command in Yenagoa, said the bandits had demanded N200m ransom from the company’s management in Lagos.
But Giwa said the company was reluctant to negotiate with the kidnappers as it continually told them that the state government was handling the matter.
He said the gunmen shot sporadically into the air before kidnapping them on the fateful day.
He added that the company’s speedboat operator employed within the community was also kidnapped but was released by the gunmen 30 minutes after the incident.
Giwa, who said the gunmen tortured them before whisking them away, added that the bandits moved them to different locations in the mangrove.
He said they were handed over to different groups of people who watched over them till the day they were set free.
Narrating how they were abducted, he said, “On December 17 by 3pm, I saw seven gunmen. They came to our site. I was in the office when I heard gunshots.
When l came out I saw my officers, four Koreans held by the neck. When they saw me, they also held me and dragged me by the neck.
“They also held one of our speedboats operators. They used their guns to hit us and order us to enter the boat. They asked us to keep our eyes down. After about 30 minutes’ sailing, they dropped the speedboat operator.
“They took us to the mangrove and handed us over to some men to guard us. They went back to their speedboat. At about 7pm, they came back and took us to another place after sailing for one hour. They kept us there till the day we were released.”
On the day they regained their freedom, Giwa said there was a mild drama among the kidnappers which suggested that they had a disagreement.
He said, “On that day, they came and pointed the gun at my head and asked me why my company didn’t want to give them the money.
“It is like our manager was explaining to them that the government was taking care of the matter and that there was no way he could release money to them. That was when they concluded that ‘this one is a bad market’. We were there till about 4pm.
“They sailed away and later came back. Their leader called commander ordered that we should be put in the boat. We didn’t know where we were going until we got to the waterside. They showed us a track and said we should follow it.”
The Commissioner of Police in the state, Mr. Kingsley Omire, said the police found the victims at Azikoro Village in Yenagoa.
Omire said, “From the brief that I have, there was a disagreement among the kidnappers who decided to release their victims.
“They brought them to Azikoro Village and I directed Operation Doo-Akpor to go and pick them up. They were not released by any security agency.”
Omire said two persons had been arrested in connection with the incident, adding that investigations were ongoing to arrest the perpetrators.
He said the police held a meeting with the management of the company and resolved to provide security for the firm and residence of the expatriates.
He said the company acknowledged that its inability to provide security for the workers was one of the managerial lapses that led to the kidnapping.
Tags
Koreans

Obi Will Get The Backing Of A National Assembly That Has Majority Of Opposition Members, Ireti Says