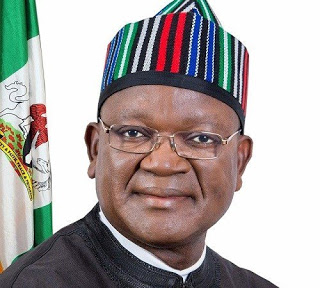 Following the Supreme Court’s verdict upholding the re-election of Governor Samuel Ortom, there was wide jubilation in parts of Benue State.

Defeated candidate of the All Progressives Congress (APC) in the March 9 and 23 governorship and supplementary election, Emmanuel Jime, had dragged the governor to the apex court to challenge his victory, but the case was dismissed for lack of merit.

In Makurdi, the state capital, supporters of the Peoples Democratic Party (PDP), the youth, students, commercial motorcyclists and market traders were seen in vehicles and streets shouting “Ortom till 2023″, “Ortom is a goal”, “congratulations the people’s governor”, “Benue is home of PDP”, “Benue is not Imo State”.

At the Government House, staff and even security men were seen jubilating over the outcome of the apex court verdict.

Speaking with newsmen on the matter, former Senator Dr. Iyorchia Ayu, said he was not surprised that the governor has triumphed, adding that the victory has vindicated people of the state.

“I am not surprised that Ortom’s election was upheld by the Supreme Court because he won overwhelmingly, he won by over 85,000 votes and again won in the rerun that was conducted.

“The Supreme Court has vindicated the people of the state who voted for him for a second term,” Ayu said.

Also, the state chairman of PDP, Sir John Ngbede, said with the governor’s victory, the opposition APC has come to the end of the road.

“The opposition in the state has come to the end of the road and I want to advise that it is time for development and let them join hands with the governor to ensure that together, we put Benue first and develop the state,” he said.

Executive Secretary, Benue State Emergency Management Agency (SEMA), Dr. Emmanuel Shior, said that the governor’s victories from the Tribunal to Appeal Court and finally at the Supreme Court has reflected the wishes of the Benue electorates.

What Lampard said about Chelsea’s 2-2 draw with Arsenal, Kepa’s performance