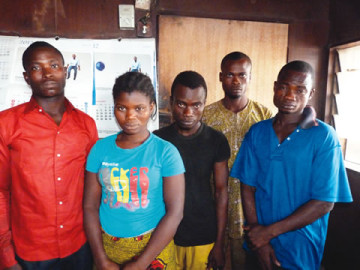 The police in Lagos State have arrested a 27-year-old housemaid, Mariam Acheme, and four others for allegedly robbing the housemaid’s boss. (Suspects pictured above)

According to police authorities, the housemaid, invited her boyfriend, Dansu Akokran, and another person at large to rob her boss and also stage her own kidnap.

The Police Public Relations Officer of the state command, Ngozi Braide, said, “On November 26, 2012, the housemaid invited her boyfriend to her boss’ house when the madam had gone out. On getting to the house, the boyfriend and another person ransacked the entire house.

“They vandalised the doors and also stole all the valuables. The housemaid then padlocked the gate from outside and fled with them.”
PUNCH Metro learnt that when the owner of the house arrived, she discovered that all her valuables were gone and Acheme was nowhere to be found.
The victim was said to have immediately reported the matter to the Bode Thomas Police Division.
Braide said a few days later, someone contacted the housemaid’s boss and informed her that Acheme had been kidnapped. She said the woman returned to the police and informed them of the development.
Braide said, “The madam told the police that some men called and said they had kidnapped the housemaid. The men asked for N5m and said if the money was not paid, they would not release her. The housemaid spoke to her ‘madam’ on the phone, crying and telling her that she was being tortured by the kidnappers and urged her boss to pay the ransom immediately.
“The Divisional Police Officer, Bode Ojajuni, immediately swung into action. Detectives at the station were able to establish contact with the kidnappers and urged them to collect N1m. The kidnappers then sent a bank account number which the money should be paid into.”
It was learnt that the account number belonged to one Prosper Tatou, a bricklayer.
Through the bank account number, policemen traced the owner to Agbara area of Ogun State and accosted him.
A close police source, who craved anonymity, said Tatou led the police to the hideout of the other suspects.
He said, “Tatou said he knew nothing about any kidnap but told us that a few days earlier, his brother, Jean Mari, had asked him to send his bank account number because he needed to receive some money from someone.
“Tatou then led us to a deserted building where his brother lives. At the house, we were able to arrest those who masterminded the purported kidnap.”
Detectives were however shocked when they saw the housemaid in the compound.
“That was when we discovered that she connived with her boyfriend to commit the crime,” the police source said.
Acheme however denied conniving with the kidnappers.
She said although she had invited her boyfriend to come and visit her when the incident occurred, she had no clue of his intentions.
“I invited my boyfriend (Dansu) to come and visit me at the house when my madam had gone out. When he arrived, he came with another guy and both of them pushed me into the toilet and locked me there. They stole all my madam’s things and then kidnapped me,” she said.
When asked why she did not escape from the purported kidnappers’ den when she had the chance, she said, “I could not escape because I did not know the terrain.”
She added, “My boss was very nice to me. She paid me N12, 000 a month and I had worked with her for seven months and she never maltreated me.
“She has two grown-up children and they even give me tip when I do their laundry. I could not have repaid their kindness with wickedness.”
Dansu also claimed to be innocent, saying it was his friend, Femi, who is now at large, that planned the whole thing.
The PPRO seized the opportunity to warn employers of domestic servants to be wary of the people they hire, noting that cases of crimes being committed by domestic servants seem to be on the rise.
The PPRO noted that the suspects were all nationals of Benin Republic and said it was necessary for employers to register their domestic servants at the nearest police stations.

Dana Air denies paying celebrities to board its inaugural flight