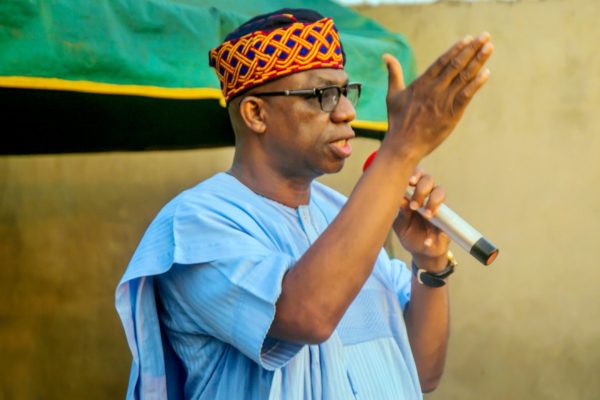 Governor Dapo Abiodun of Ogun State has accused some youths of Sagamu area of the state of attempts to loot banks and the local government secretariat under the guise of protesting the death of the Remo stars footballer, Kazeem Tiyamiyu, Monday.

The governor also said the youths attempted to attack the Sagamu Divisional Police Officer and to burn an armoured personnel carrier.

Reported that Tiyamiyu, known as Kaka, died on Saturday as residents of Sagamu alleged that the footballer was killed by men of the Special Anti-Robbery Squad (SARS).

It was also gathered that yesterday’s protest turned riotous, reportedly leading to fatalities.

But, Abiodun said some youths refused to remain calm even after they have been urged to eschew violence as they took advantage of the protest to commit crimes.

“Contrary to the promise of restraint given by the youth, a while after the peace meeting, some youth defied the calls for restraint and decided to take the advantage of the situation by embarking on activities that further aggravated the already tense situation. They attempted to attack the Divisional Police Station, burn the police Armoured Personnel Carrier (APC), and even loot the banks and local government headquarters,” Abiodun said.

Gov Abiodun, in a live Facebook video last night, said he received briefings from security chiefs in the state on the matter, saying he deemed it fit to share the information with the public.

The governor said his government would not tolerate any breach of peace in Sagamu, while sounding a note of warning that anybody caught fomenting trouble would face the wrath of the law.

Abiodun said he had informed the Presidency about the unfortunate incident, adding that he had got assurances for the restoration of normalcy.

According to him, security has been beefed up in Sagamu, including the deployment of soldiers.

He appealed to all law-abiding indigenes of the area to go about their lawful businesses without any fear of molestation.

“Let me assure all the good citizens of Ogun State and residents of Sagamu that they should go about their lawful business without any fear of molestation whatsoever. I wish to sound a note of warning that anyone that attempts to capitalise on the unfortunate incident to foment any trouble or engage in activity that is in breach of public peace and order will be subjected to full force of law. Parents and guardians should caution their children and wards to refrain from confrontation with law enforcement agents whilst carrying out their responsibilities of maintain law and order,” he said.