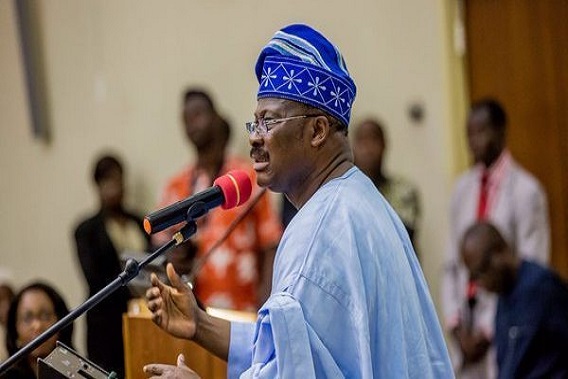 Reported that Ajimobi had been on a life support machine since last Friday at First Cardiology Hospital in Ikoyi, Lagos.

This was after lapsing into a coma following Coronavirus complications.

Confirming the demise of the former Oyo State governor is Dele Momodu, the editor of Ovation Magazine.

Investigative journalist and a relative of Ajimobi, Kemi Olunloyo, further confirmed the news via her Twitter page.

“RIP Governor Abiola Ajimobi. My second cousin, my father’s cousin, my grandmother’s nephew, my Governor of 8 years in Oyo state. Coronavirus is real! Thank you for your service sir, Thank you for the memories. He left us ~3:45 PM.”

On Monday, a reliable source close to the ex-governor had revealed that Ajimobi had been on life support machine after he slipped into a deep coma and may not make any recovery going by the observations of medical experts around him.

It was also gathered that he had lung surgery since being rushed to the Lagos hospital but made no progress while his kidneys had also failed.

Doctors treating Ajimobi, it was reliably gathered, last Friday informed his family that his situation had defied every medical intervention and that only a miracle could bring him back to life.

Meanwhile, the National Working Committee of the All Progressives Congress (APC) has been dissolved.

This followed the recommendation of President Muhammadu Buhari; during the meeting of the committee at the Presidential Villa, Abuja, on Thursday.

President Buhari’s special assistant on new media, Bashir Ahmad, made this disclosure via his Twitter handle.

“The National Working Committee (NWC) of the APC has been dissolved; the decision has just been taken at the ongoing Party’s NEC Meeting,” he tweeted.

Watch Detailed Report Of How Dubai Police Monitored Hushpuppi, Others For 4 Months Before Arrest