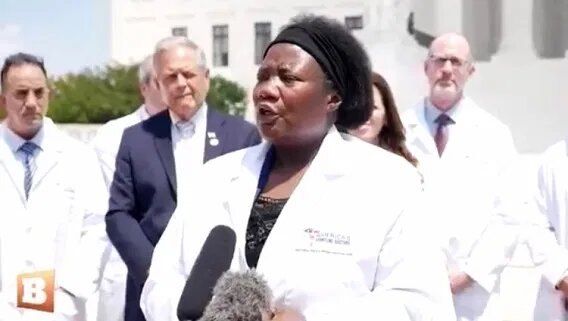 The video about the COVID-19 cure was first published by Breitbart News on Monday, July 27, a right-wing medium co-founded by Steve Bannon, a former aide to American President, Donald Trump.

In the video, which was shot in front of the United States Supreme Court, Dr Immanuel is seen with seven others wearing white lab coats named “America’s Frontline Doctors” and addressing the press.

President Trump, who is up for reelection in November, shared multiple versions of the video with his 84 million Twitter followers on Monday night.

During the press conference, she claims “you don’t need masks” to prevent the spread of the COVID-19 pandemic.

She also stated that recent studies showing hydroxychloroquine is ineffective for the treatment of COVID-19 are “fake science” sponsored by “fake pharma companies”.

Immanuel disclosed this when she addressed the press after America’s Frontline Doctors Summit in front of the U.S. Supreme Court in Washington, D.C. on Monday, July 27.

She had first touted the effectiveness of the drug on April 27.

“Hydroxychloroquine works if given early. President Trump, we are with you. Many of us doctors know it and have used it. Don’t stop speaking up for us,” she tweeted.

Hydroxychloroquine has long been used to treat malaria as well as other conditions such as lupus and arthritis.

It’s used to reduce fever and inflammation, and the hope has been that it can also inhibit the virus that causes Covid-19.

US President Donald Trump and his Brazilian counterpart Jair Bolsonaro have since claimed hydroxychloroquine could prevent or treat COVID-19.

“I’m here because I have personally treated over 350 patients with COVID,” Immanuel said in the video that has gone viral.

She said she put herself, her staff, and other doctors she knew on hydroxychloroquine for prevention of COVID-19.

“We give them breathing treatments. We only wear a surgical mask. None of us has gotten sick. It works.”

Her assertion is contrary to multiple studies on the anti-malarial drug and advice from public health officials to prevent the spread of the virus.

According to CNN, a study found that neither hydroxychloroquine alone nor with azithromycin improved the condition of patients at the 15-day mark.

Additionally, unusual heart rhythms and elevated liver-enzyme levels were more frequent in patients receiving hydroxychloroquine alone or with azithromycin, according to the study.

The video has since gone viral on social media platforms. On Facebook, it became one of the top-performing posts on the platform with more than 14 million views before it was taken down Monday night for promoting misinformation.

It was shared nearly 600,000 times, according to Crowdtangle, a data-analytics firm owned by Facebook.

A Facebook spokesperson told CNN; “We have removed this video for sharing false information about cures and treatments for COVID-19.”

The spokesperson added that the platform is; “Showing messages in News Feed to people who have reacted to, commented on, or shared harmful COVID-19-related misinformation that we have removed, connecting them to myths debunked by the WHO.”

Twitter has also taken actions against any version of the videos that Trump retweeted on Monday night after he shared versions that amassed hundreds of thousands of views.

By early Tuesday morning, the videos were no longer able to be viewed on his account.

Twitter also took action on a version of the video posted by Donald Trump Jr. and others shared by Breitbart News.

On YouTube, the video has also removed, where it had been viewed more than 40,000 times.

Users attempting to access the video late Monday were greeted with a message that said it had been removed for “violating YouTube’s Community Guidelines”.

However, several copies of the video have been generated and are still in circulation mostly on Twitter.