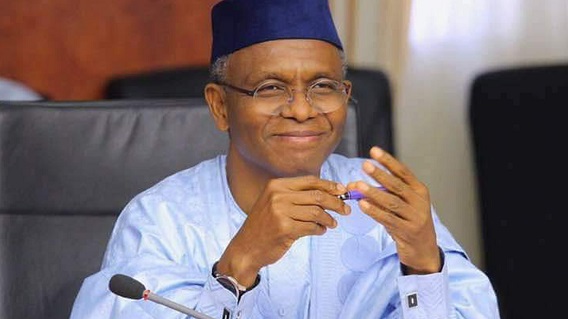 Kaduna State Governor Nasir El-Rufai, on Sunday, April 28, extended the quarantine orders being enforced in the state for another 30 days.

This decision by El-Rufai was in the aftermath of recommendations made by the State Standing Committee on Covid-19, which is chaired by the Deputy Governor, Dr Hadiza Balarabe.

In a statement issued by Muyiwa Adekeye, the special adviser to the El-Rufai on media; the governor reviewed the Quarantine Orders to strengthen the provisions against unauthorised movements.

The statement further added that “the two-day window during which the restriction of movement is relaxed on Tuesdays and Wednesdays has been reduced to only one day.”

Adekeye also disclosed that wearing of facemasks will be enforced as a critical public health measure to reduce person-person transmission of COVID-19.

He added that to support the provision of those items to the low income, poor and vulnerable residents of the state; the state government also directed all its senior appointees, including Commissioners, Permanent Secretaries, Special Advisers and Heads of Agencies to each donate N500,000 in April 2020, adding that, in subsequent months, they will donate 50% of their salaries until the quarantine ends.

According to the statement, El-Rufai revealed that while other political appointees are to make monthly donations; career public servants earning a net pay of N67,000 and above after-tax will also donate 25 per cent of their monthly pay.

He said: “Henceforth, only Wednesdays will be lockdown-free until the trajectory of Covid-19 infections becomes clearer.

“All persons that venture out of their homes for whatever reason must wear facemasks and observe social distancing everywhere they go, in markets and in authorised vehicles.

“Government is making efforts to provide facemasks for poor and vulnerable residents, and it appeals to everyone that can afford it to get their tailors to make them cloth facemasks which they can wash after every use.

“The government also encourages tailors to produce facemasks for sale to those that are neither poor nor vulnerable.”