Skip to content
You are here: Home » NEWS » EFCC reacts to orders stopping probe of Saraki, Okorocha, moves against judge 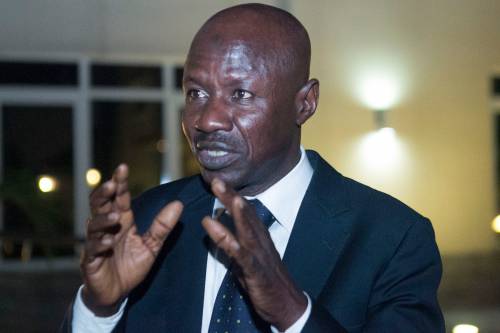 The EFCC, in a letter to the Chief Judge of the Federal High Court, accused Justice Taiwo Taiwo, who made the orders, of bias.

In the letter by EFCC’s Acting Chairman, Ibrahim Magu, the commission requested the transfer of the cases from Justice Taiwo

His letter reads: “Your lordship, the Economic and Financial Crimes Commission is the 4th defendant in the respective cases stated above which are pending before Honourable Justice Taiwo O. Taiwo of your lordship’s court.

“The commission respectfully requests your lordship to re-assign the above-stated cases and all other cases pending before Honourable Justice O. Taiwo in which it is involved to other judges of your lordship’s court.

“This application has become very necessary because of the commission’s lack of confidence in his lordship’s impartiality to dispense justice in any matter concerning it.

“Particularly more worrisome is that the said orders were made ex parte contrary to the acclaimed judicial depreciation of abuse of ex parte orders by court’s and Rule 3.5 of the Revised Code of Conduct for Judicial Officers of the Federal Republic of Nigeria which states: ‘A judicial officer must avoid the power of issue interim injunctions ex parte.”

Magu recalled that Justice Taiwo had in the past “demonstrated obvious bias against the commission” in a matter involving former Ekiti State governor, Ayodele Fayose.

“On June 24, 2016 the EFCC applied and secured an interim freezing order from the Federal High Court, Lagos Judicial Division wherein his Lordship, Hon. Justice M.B. ldris ordered the Manager of Zenith Bank Plc to freeze bank accounts numbers 1003126654 and 9013074033 among others operated by Mr Ayodele Foyose pending the investigation and possible prosecution of the criminal case involving the accounts.

“Your Lordship, Mr. Ayodele Foyose subsequently instituted another suit in suit number. FHC/AD/15/2016 at the Federal High Court, Ado Ekiti Judicial Division praying the court for an order directing the EFCC and Zenith Bank Plc to wheeze and make operational the said accounts.

“Shockingly, His Lordship. Honourable Justice Taiwo O. Taiwo, despite being aware of the pendency of the mower before Honourable Justice M .B ldris and his said order which were duly brought to his notice, proceeded to set it aside, thereby sitting as an appellate court over the decision of a court of coordinate jurisdiction.

“It was, however, not surprising that the Court of Appeal, on appeal, held that Honourable Justice Toiwo O. Taiwo ought not to have done what he did.

“The judgment of the Court of Appeal in the appeal no. CA/EK/8C12017. EFCC V MR. AYODELE FAYOSE is attached 03 Annexure E.

“Furthermore, when the commission was conducting investigation on acts of corruption allegedly perpetrated by some officials of the Ekiti State Government. the Attorney General of the State filed suit no. FHC/AD/CS/32/2016 against it and other persons.

“His Lordship, Honourable Justice Toiwo O. Taiwo, on January 30, 2018 in his judgment in the said case no. FHC/AD/CS/32/2016 granted wholesale all the eight reliefs sought by the plaintiff in the suit which included perpetual injunctions restraining Ekiti State officials , Ekiti State House of Assembly and banks in which the accounts of the Ekiti State Government were maintained from disclosing or making available to it any document, financial statement or information relating to the public funds and accounts of Ekiti State.

“This undoubtedly frustrated its investigation. A copy of the said judgment is attached as Annexure F.

“Though the commission is not by any means positing that His Lordship, Honourable Justice Taiwo O. Taiwo should always decide cases in its favour, even when it does not deserve it. the trend of His Lordship shows unbridled bias against it which has made it difficult for it to believe in His Lordship’s impartiality.”