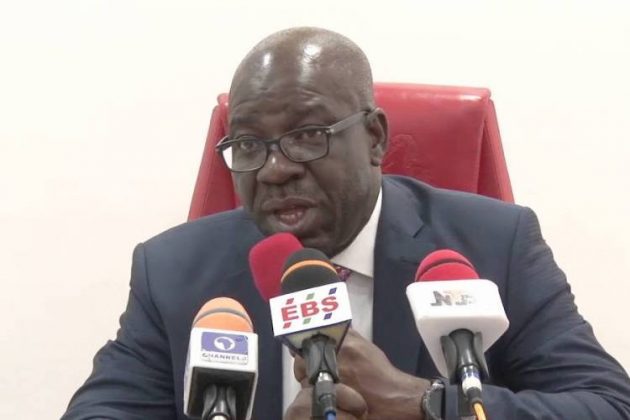 Governor Godwin Obaseki of Edo state on Monday, June 29, secured another victory ahead of the upcoming governorship elections in Edo State.

The Abuja division of the Federal High Court had struck out a suit; seeking his disqualification from the poll on account of alleged certificate forgery.

This was after a suit filed by Edobor Williams, Ugesia Godwin, and Amedu Anakhu; who joined the governors’ former party, the All Progressives Congress (APC), the Inspector-General of Police and Obaseki himself.

Justice Anwuli Chikere struck out the suit as neither the plaintiffs’ lawyers nor the defendants’ were present in court.

The plaintiffs alleged that the University of Ibadan certificate which Obaseki attached to his Form CF.001 which he submitted to INEC for his first term election in 2016 was forged.

Also, they explained that the governor’s educational information contained in Part C of the Form CF 001 which he submitted to INEC on July 12, 2016; and the first-degree certificate of Bachelor of Arts in Classical Studies; said to have been obtained from the University of Ibadan, Ibadan, was forged.

The plaintiffs had argued that this was “contrary to the provisions of section 182(1)(i) of the Constitution of the Federal Republic of Nigeria, 1999”.

According to them, Obaseki was, therefore; “not qualified to run or seek the office of Governor of Edo State; under the platform of the 1st defendant (APC) in the governorship election scheduled to hold in the state on September 19, 2020”.

Meanwhile, the All Progressives Congress (APC) candidate in the Edo governorship election; Osagie Ize-Iyamu on Sunday, June 28, explained that the party’s suspended national chairman Adams Oshiomhole never meant the bad things he said about him.

Ize-Iyamu, who was a candidate of the PDP in the last state governorship election, defected to the APC in the heat of a misunderstanding between Edo state governor, Godwin Obaseki and Oshiomhole.

Oshiomhole, in 2016, had criticised Ize-Iyamu repeatedly during an APC rally while campaigning for Obaseki.

He described the APC governorship candidate as someone who cannot be trusted with public funds.

However, the APC governorship candidate stated that the remarks from Oshiomhole were meant to ‘demarket’ him.

Ize-Iyamu further said that Oshiomhole was just playing politics; as the things the former governor said about him were never from his heart and stopped right after the election.